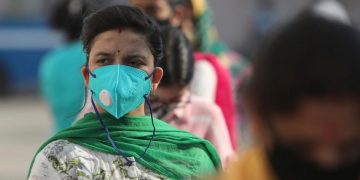 People wait in a queue to register their names to have their nasal swab samples taken to test for COVID-19 at a government hospital in Jammu, India, Tuesday, Sept. 15, 2020. India confirmed more than 83,000 new coronavirus cases on Tuesday, bringing its total caseload to nearly 5 million. (AP Photo/Channi Anand) THE ASSOCIATED PRESS

New Delhi, September 16 (newsin.asia) – India surpassed the 5 million mark in coronavirus cases Wednesday as the country continues to battle the spread of the disease.

India is only the second country in the world to cross the grim milestone of 5 million cumulative cases, after the United States.

India reported a record daily high of 97,570 cases on Sept. 11 and has added more than 1 million cases this month alone.

Most of India’s deaths are concentrated in its large cities — Mumbai, Delhi, Bengaluru, Chennai and Pune. But smaller urban centres in Maharashtra like Nagpur or Jalgaon have also reported more than 1,000 deaths.

According to the Health Ministry, 155 health workers, including 46 doctors, have died so far due to COVID-19.