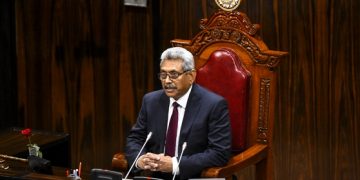 The Tamils' demand for greater devolution to the Provincial Councils was not addressed and the Muslims fear that their personal laws will go when government implements the "One Country, One Law" policy Sri Lanka's President Gotabaya Rajapaksa speaks at the national Parliament session in Colombo on August 20, 2020. - Sri Lanka's new parliament opened its first session on August 20 with a murderer and an accused killer among its ranks after a sweeping election victory by the ruling Rajapaksa brothers. (Photo by ISHARA S. KODIKARA / AFP)

Colombo, August 24: Sri Lanka’s minorities, namely, the Tamils, and Muslims, who are 25% of the island’s population of 21 million, were given short shrift in President Gotabaya Rajapaksa’s statement of government policy at the opening of the newly elected Parliament on August 20.

Ethnic issues, which had rocked Sri Lanka for over four decades, were not even mentioned in the speech. On the contrary, certain general announcements hinted that the rights and aspirations of the minorities, as visualized by them so far, will have no scope for realization under the current regime.

The Tamils’ 72 year old demand for a federal constitution was shot down with the declaration that the ruling Sri Lanka Podujana Peramuna (SLPP) had a got a massive mandate to retain the constitution’s unitary character. The Muslims, who have been refusing to amend their personal laws despite an internal progressive movement, were told that the country will have a uniform law for all people.

In the constitution to be drafted, “Priority will be given to the concept of one country, one law for all the people. As representatives of the people, we always represent the aspirations of the majority. It is only then that the sovereignty of the people can be safeguarded. In accordance of the supreme constitution of our country, I have pledged to protect the unitary status the country and to protect the Buddha Sasana during my tenure,” he said.

Giving the Buddha Sasana a role in the governance of Sri Lanka, the president said: “I have set up an advisory council comprising leading Buddhist monks to seek advice on governance.” To buttress the historical claims of Buddhism in Sri Lanka, the president said he has set up a “Presidential Task Force to protect places of archaeological importance and to preserve our Buddhist heritage.”

However, he assured non-Buddhists that they would enjoy freedom of worship as protection of Buddhism ensures the freedom to practice other faiths.  “While ensuring priority for Buddhism, it is now clear to the people that freedom of any citizen to practice the religion of his or her choice is better secured.”

The existing Proportional Representation System, which has helped small and minority parties to secure seats in Parliament, will be diluted to accommodate the First Past the Post System so that stable governments can be formed. “An unstable Parliament that cannot take firm decisions and succumbs to extremist influences very often is not suitable for a country. While introducing a new constitution, it is essential to make changes to the current electoral system. While retaining the salutary aspects of the proportional representation system these changes will be made to ensure stability of the parliament and peoples’ direct representation,” the president said.

His failure to mention the long standing issue of adequate devolution of power to the elected Provincial Councils (PCs), which were established following the India-Sri Lanka Accord of 1987, triggered fears that the elected PCs set up by the 13Th Amendment (13A), might be abolished. Predictably, the 13A was the main subject of discussion when five top leaders of the Tamil National Alliance (TNA) met Indian High Commissioner Gopal Baglay on Friday (21). At the two hour meeting, the High Commissioner reiterated India’s longstanding position on ethnic reconciliation and the full implementation of the 13A.  TNA spokesman, M. A. Sumanthiran, said the High Commissioner assured the delegation that India has a “strong commitment to the principles underlying the Indo-Sri Lanka Accord and that the Accord cannot be viewed as a mere piece of paper.”

On what India might do if the Government of Sri Lanka jettisoned the 13A, the High Commissioner had said there would be “interactions at the highest level” on this between India and Sri Lanka.

However, the High Commissioner had also added that the details of the implementation of the Accord would be left to be worked out by the two local parties concerned, namely, the government of Sri Lanka and the Tamil parties.

The Tamils’ fears may actually be groundless. All indications are that abolition of the 13A won’t be on the cards. Justice Minister Ali Sabry told the media the 13A could not be abandoned because it stemmed from an international treaty. Moreover, Sri Lankan politicians (including Sinhalese politicos) have developed a vested interest in the existence of the Provincial Councils. The PCs are elected bodies between the grassroots level Pradeshiya Sabhas and Parliament. They are seen as an avenue of political mobility. Prime Minister Mahinda Rajapaksa had openly said earlier that if he abolished the Provincial Councils, Sinhalese politicos will themselves demonstrate in front of his office.

Significantly, in his speech, President Gotabaya Rajapaksa spoke only about the abolition of the 19th Amendment, not the 13A. And in the Vote on Account proposals submitted to Parliament, the Provincial Councils, local government institutions and the civil service have been allotted a total of Rs 194 billion (US$ 1 billion), the highest allocation for a ministry. Elections to the PCs are also to be held soon to cash in on the SLPP’s current popularity.

As president between 2005 and 2014, Mahinda Rajapaksa had promised 13A ‘Plus’ in response to pressure from India. But the promise was not kept. During the United National Party-led ‘Good Governance’ regime between 2015 and November 2014, an effort was made to draft a new constitution but it was abandoned at the last moment because of a lack of political will at the top-most level, and also because of a constitutional crisis in 2018.

Now, the TNA wants the full implementation of the 13A with land and police powers devolved to the provinces. But the Tamil Makkal Thesiya Koottani (TMTK) has rejected the 13A and said the Tamils need self-determination. It has demanded an internationally monitored referendum on the Tamil question.

Devolution of power is not an issue for the Muslims as they are scattered all over the island with a little bit of concentration in the Southeast. They are also against the division of the country and are content to be in a unitary state. They also do not care about securing more power for the Provincial Councils as they do not have a majority in any province, unlike the Tamils, who have a clear majority in the Northern Province.

The Muslims’ principal concern is safeguarding Islam as they view it, and the new Wahhabi social mores they have adopted thanks to exposure to the Arab world in the last 25 years. But their new found Wahhabi ideology and culture have alienated them from the majority Sinhalese community who see them as part of an international, aggressive, separatist and violence-prone movement. The April 21, 2019 multiple bombings by a bunch of local Muslim terrorists had so alienated the Sinhalese majority, that the SLPP got two thirds majority with the support of the Sinhalese only in the recent presidential and parliamentary elections.

The Gotabaya government formed after the November 2019 presidential election did not have a single Muslim minister and the government formed after the August parliamentary elections has only one. On top of that, President Gotabaya declared in Parliament that there would be only one law in the country, whereas Muslim secular and religious leaders are fighting tooth and nail to maintain the community’s personal laws, including marriage and divorce laws.

Speaking on the subject in Parliament, All Ceylon Makkal Congress MP Rishad Bathiudeen said the Muslims’ personal laws are part of the Muslims’ tradition and that it would be unjust and iniquitous to subject them to a common law. He argued that a common law would necessarily mean that it would be a law as per the ideas and interests of the Sinhalese Buddhist majority. He warned that the government would be violating the international covenant on cultural rights if it abolished Muslim personal laws.