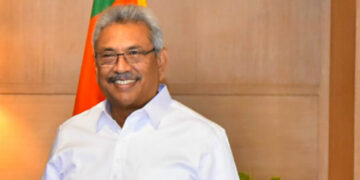 Colombo, March 28 (newsin.asia): The Sri Lankan President Gotabaya Rajapaksa told a village audience in Matara district on Saturday that his government “will face the Geneva challenge without fear.”

“We will never succumb to pressures. We are a free nation. We will not be a victim of big power rivalry in the Indian Ocean. Foreign and local forces who cannot stand this progress and the mafias which support them are misleading the public.”

“The country was thrown into a crisis by entering into agreements such as the MCC Compact and the Eastern Container Terminal Agreement. The President added that they are being resolved today,” he charged.

President said that those who created and supported all the issues are now protesting against the present government adding that several prominent figures from the former government are pretending as if they were never in power. The President observed that although it was not his way to respond to baseless allegations, now he has to answer and expose lies.

“The devastation caused in the last five years can repeat if the true progress is left unnoticed and you choose to believe lies and misled yourself. If you give into those lies the damage could be irreversible.” President warned..

“National security was ignored due to the wrong priorities of the previous government. The Easter Sunday attack was a result of that. War heroes were imprisoned on baseless charges. The country’s sovereignty was compromised by co-sponsoring the Geneva resolution. Attempts were made to destroy the culture and religion associated with our unique heritage by provoking issues in relation to tamed elephants,”  he said.

Turning to his development plans, the President said: “Strategies are now in place to utilize renewable energy sources to the tune of 70% of energy requirements by 2030. Steps have been taken to supply electricity to the main power grid from over 7000 solar power systems. The use of chemical fertilizer will be reduced by 25% every coming year. All these projects are aimed at conserving the environment as well as strengthening the economy.

The idea behind this program is for the President to talk to the rural communities living in remote and difficult areas without intermediaries about their long-standing unresolved problems and to present them directly to the officials in order to find solutions.

Problems that can be solved on the spot are instantly addressed. The rest which takes time to deal with are noted down to find solutions later. The objective of the program is to reach out to the people of the village, understand their problems and find solutions giving considerations to their own suggestions.

It was decided at the “Discussion with the Village” to expedite the development of bridges including Pahuruthota, Jambugasdola, Mederipitiya and Velangavita which were destroyed by the floods.

The President instructed the officials to resolve the issues regarding the unauthorized use of land belonging to the Land Reforms Commission and conduct surveys following a joint inspection of large tracts of land under plantation companies.

It was decided to hold a “Land Day” to resolve all existing land issues in Pitabeddara and adjoining villages.

The Road Development Authority was tasked with identifying unsafe slopes on roads in the area and constructing safety fences.

President Rajapaksa instructed the relevant officials to develop about 120 km of roads including Derangala, road near the Podidahayakanda bus stand, Mahena Ella road and Nagahahena 517 road in Banagala East within the next few months.

Farmers apprised the President regarding the difficulties faced by them in selling cinnamon produce. The President instructed to formulate a proper system and monitoring mechanism to end the injustice caused in purchasing grade A cinnamon as grade B. The Ministry of Plantations was directed to distribute high-quality cinnamon seedlings to nurseries owned by Cinnamon Farmers’ Associations.

The small-scale tea plantations in the area have a history of over 35 years. It takes more than 2 years to replant and collect tea harvest. The President emphasized the need to expedite the replanting of tea by providing an annual allowance for two years to compensate the loss of income during this period as a remedy.

The President instructed the Secretary of Education to take steps to eliminate the issue of shortage of teachers and develop infrastructure facilities in schools.

The President also directed the officials to renovate the Derangala Health Center and provide immediate solutions to a number of public problems including infrastructure development and filling vacancies in health centers in the area.