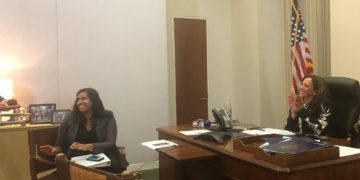 Kamala and Rohini: The Indo-Lankan combo in the US Vice President’s Office

Kamala and Rohini: The Indo-Lankan combo in the US Vice President’s Office Kamal Harris and Rohini Kosoglu in the former's Senate Office

Washington, January 20 (BBC): Kamala Devi Harris, born to a Jamaican Economist and an Indian Tamil cancer researcher, will make history when she takes the oath of office on Wednesday, becoming the first woman and first black and South Asian American to serve as US vice-president. Harris’ Domestic Policy Advisor is Rohini Kosoglu, daughter of a medical doctor of Sri Lankan Tamil origin. This is the first Indo-Lankan-American combo in the history of the White House.

Here’s what awaits Ms Harris in her new job: What does a vice-president do? Historically speaking, not a lot. It has been described as the least understood, most ridiculed and most often ignored constitutional role in the federal government, and for a long time it stayed that way.

For some vice-presidents, the dynamic meant holding a job you hoped would never be needed. “One of the vice-presidents in the early 20th Century said, ‘Every day I ring the doorbell at the White House and hope the president will answer,'” Ms Perry said.

That’s not a role to take lightly. Nine of the country’s 45 presidents has left office before the end of their term, eight by death – about one fifth of all presidents – giving their vice-presidents a sudden promotion. At 78 years old, Mr Biden will be the oldest president to assume the office, putting added stress on his next-in-line.

It wasn’t until the 1970s, under President Jimmy Carter, that the vice-president began to assume a bigger role.

Mr Carter, a former Georgia governor, had built his candidacy around being a political outsider. “He knew he didn’t know Washington,” Ms Perry said. So when he won the nomination, he called on Walter Mondale, a long-time US senator, to show him the ropes and be a “true governing partner”.

The unstoppable rise of Kamala Harris

While their close relationship was new, their strategic match followed a well-worn pattern of vice-presidents offering geographical or ideological balance to the president.

The practice has continued on most recent political tickets. Barack Obama, then a relative political newcomer, tapped Joe Biden, a 35-year veteran of the US Senate. Donald Trump went with Mike Pence, whose evangelical bona fides were thought to smooth over Mr Trump’s image for the religious right. And Ms Harris offers a counter to Joe Biden’s age, gender and race.

What’s more, this time the ceremonial role held by the vice-president as president of the Senate will prove crucial for Ms Harris’ party. There is currently a 50-50 seat split between Democrats and Republicans in the upper chamber, and Ms Harris will cast the deciding ballot in any tie.

Where do they live?

Ms Harris and her husband Doug Emhoff will set up home in a different white house – a 19th Century mansion on the grounds of the US Naval Observatory in north-west Washington.

The estate is close to the White House grounds, where Ms Harris will have her office, and not far from Georgetown University’s law school, where Mr Emhoff, an attorney, is set to teach.

To get around, Ms Harris and Mr Emhoff will also have access to Air Force Two, a Boeing 757, and they will have round-the-clock security.

Do Harris and Biden get along?

While Mr Biden and Mr Obama often put their bromance on display during their time in the White House, close personal relationships between presidents and vice-presidents have not been the norm, Ms Perry said.

But since Mr Biden officially brought on Ms Harris this summer, it has seemed to be smooth sailing, Ms Perry said.

Mr Biden has said “there’s not a single decision I’ve made yet” about his administration that he hasn’t consulted with Ms Harris on first. She has also interviewed each of Biden’s potential cabinet nominees.

A friendly relationship makes sense between the two, considering it was Ms Harris’ close relationship with Mr Biden’s son, Beau – who died of brain cancer in 2015 – that reportedly sealed the deal for Mr Biden.

It’s a surprise to some who remember Ms Harris’ sharp debate-stage attacks aimed directly at Mr Biden when they were both competing for the Democratic nomination. “Biden clearly lets bygones be bygones,” Ms Perry said.

How much influence will Harris have?

Mr Biden is likely to model Ms Harris’ role after his own time as vice-president.

When he introduced her as his running mate at the 2020 Democratic National Convention, he recalled the time he was chosen for the same job by Barack Obama in 2008.

Mr Obama asked what Mr Biden wanted from the role.

What kind of vice-president will Harris be?

Ms Harris joined Mr Biden’s team as a political star in her own right. Though her own presidential bid failed to find its focus and sputtered to an early halt, it earned her a devoted fan following (they call themselves the #KHive).

And despite continued criticism from the left wing of her party, Ms Harris had one of the most liberal voting records in the US Senate, pursuing progressive causes like gay rights, immigration, legalisation of marijuana and gun control. She also has an extensive legal résumé, having served as California’s top lawyer before her Senate bid.

Her legal experience and advocacy for police reform will be useful in a White House that has promised to address “systemic” misconduct in US police forces. This summer, amid a wave of Black Lives Matters protests, Ms Harris was a vocal supporter of the demonstrations and called for a “reimagining” of US policing.

But as a vice-presidential “first” three times over, she will enter office shouldering heavy expectations. “While I may be the first woman in this office,” Ms Harris is fond of saying, “I will not be the last.”

The historic moment for black Americans is worth celebrating, said Jennifer Edwards, senior director at racial justice organisation Color of Change. “But we learned time and time again that representation alone doesn’t lead to transformative change.”

“Hundreds of thousands of black women have fought, organised and voted to reach this moment. Now, Vice-President-elect Kamala Harris has a responsibility to represent demands of the people who ushered her into office,” she said.

Ms Edwards said she will be looking for progress in Covid-19 economic relief, on criminal justice and voting and election reform.

As the more left-wing half of the political partnership, Ms Harris may face blame for perceived shortfalls here, and elsewhere in their progressive agenda.

And reports that Mr Biden will not seek re-election will mean a balancing act for Ms Harris – how to remain a loyal aide to Mr Biden while also plotting her own run.

What are the potential pitfalls?

Firstly, it’s crucial that the American public see the vice-president as competent, and able to take the reins as commander-in-chief at any moment.

This has not always been the case. President George Bush’s deputy, Dan Quayle, for example, was “not viewed as the brightest bulb in the drawer,” Ms Perry said.

The impression was cemented during a visit to an elementary school. A student was called upon to write a word, ‘potato’, on the chalkboard. “The student wrote ‘potato’ as it was correctly spelled,'” Ms Perry said. But Vice-President Quayle chipped in, saying the word needed an E at the end.

A vice-president should also avoid getting on their boss’s bad side.

Soon after his 1828 election, President Andrew Jackson developed a deep dislike of Vice-President John Calhoun. The two differed on policy and on Washington’s social scene. The antipathy between the two grew so intense that Mr Calhoun became the first vice-president in US history to resign.

Still, the title for worst vice-presidential mistake probably rests with the country’s third, Aaron Burr. While in office, Mr Burr shot and killed his rival, American founding father Alexander Hamilton, in a duel. But while it ruined his reputation, Mr Burr still completed his term, sheltered from prosecution.

Rohini Kosoglu is a seasoned leader with over fifteen years of experience advising elected officials and candidates and serving in senior roles on national campaigns and Capitol Hill with expertise in managing large and complex organizations, says a write-up on her by the Harvard Kennedy School of Politics.

Since 2017, Kosoglu has served as a senior advisor to U.S. Senator Kamala D. Harris (D-CA) in her U.S. Senate office and presidential campaign, Kamala Harris for the People. As Chief of Staff to Harris’ presidential campaign, Kosoglu managed and oversaw debate preparation, policy, communications, and operations for a team with over three-hundred staff with a $40 million budget. Prior to Harris’ presidential race, Kosoglu served as Chief of Staff to Harris in the Senate, directing Harris’ legislative strategy and leadership on key committees, including the Senate Judiciary, Homeland Security and Government Affairs, and Budget Committees.

Kosoglu was the first South Asian woman to serve as Chief of Staff to a U.S. Senator and was notably the only Asian American to serve in that role during her tenure. Under her leadership, Kosoglu held a commitment to creating a diverse and representative staff by developing a talent pipeline that led to the Joint Center for Political and Economic Studies naming Harris’ office as the most diverse on Capitol Hill.

Kosoglu’s career on Capitol Hill has also included leadership positions with leading Democratic Senators, including U.S. Senator Michael Bennet (D-CO) and U.S. Senator Debbie Stabenow (D-MI). During her tenure, Kosoglu led negotiations on numerous bipartisan legislation, with a focus on the economy and health care. Most notably, Kosoglu served as a key advisor during the drafting and passage of the Affordable Care Act in 2010.

Kosoglu has received numerous awards for her legislative accomplishments, including the Rising Star Award from the Women’s Campaign Forum and organizations such as Pew Charitable Trust, Juvenile Diabetes Research Foundation, and the National Rural Health Association. She has also been a featured speaker for the Democratic National Committee, the National Education Association, and Kauffman Center for Venture Capital and Entrepreneurship. In 2020, Kosoglu served as a Resident Fellow at the Institute of Politics at Harvard Kennedy School leading a weekly discussion on navigating careers in political campaigns and Capitol Hill.

Kosoglu received a B.A. in English with Honors from the University of Michigan and a Masters in Legislative Affairs from George Washington University. She currently resides in the Washington D.C. area with her husband and three sons.

(With a few additions from newsin.asia and the website of the Harvard Kennedy School of Politics)