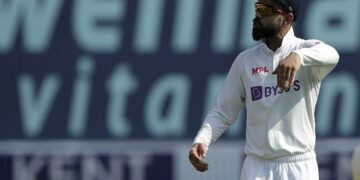 Ahmedabad, March 12 – The teams will clash on Friday in the first of a five-match Twenty20 series in Ahmedabad, which assumes more importance coming in a World Cup year.

Morgan and his deputy Jos Buttler have said India, host of the tournament in October-November, would be the favourites to win a second World Twenty20 title.

Kohli, however, believes Morgan’s side, who won the 50-overs World Cup two years ago, deserve that tag.

“I think it’s England who will be the team to beat,” the 32-year-old told a news conference.

“They are the number one side in the world and the prime focus will be on them in this World Cup.

“All the other teams will be wary of the strengths that they bring onto the park and every other team would agree with what I say.

“It’s England who are the favourites and that will not change regardless of how they think.”

Inaugural 2007 champions India will certainly have their own ambition.

Kohli has at his disposal such an abundance of Twenty20 talents that someone like veteran spinner Ravichandran Ashwin continues to sit out of the 20-overs squad.

“Washington (Sundar) has been doing really well for us. So you cannot have two players of the same discipline playing for the same spot,” Kohli explained.

“Unless Washy has a drastically horrible season and things go south for him… where would you add Ash in the team when someone like Washington already does that job for the team?”

“KL and Rohit have been consistently performing at the top of the order for us and those two would start,” he said.

“In a situation where Rohit takes a rest, or KL has a niggle or something like that, Shikhar obviously comes in as the third opener.” (Reuters)