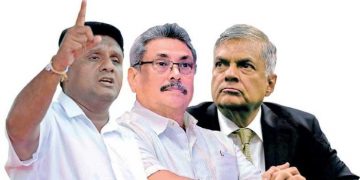 Debate over the 20 th. Amendment Bill is likely to be wide, intense and divisive

Debate over the 20 th. Amendment Bill is likely to be wide, intense and divisive Sajith Premadasa, Gotabaya Rajapaksa and Ranil Wickremesighe will fight over 20A

Colombo, September 3: The stage is set for a huge public awareness debate on the Government’s exercise to bring about constitutional changes – first the enactment of the 20th Amendment and later the introduction of a fully-fledged Constitution.  Actually, the debate has already started, and it is bound to gather momentum in the days to come since the 20th Amendment has already been placed before the Cabinet for consideration.

The 20th Amendment is sought to be incorporated into the Constitution as a modification of the 19th Amendment which was enacted by the Yahapalana Government in 2015 as one of its main pledges to the constituents at that time. It has pruned the powers of the President and vested them with the Prime Minister and the Constitutional Council which is a parliamentary body with three civil representatives as well.

But, they did not opt for an open, virulent confrontation with Sirisena fearing he would otherwise dissolve parliament, an act that would have left them reeling at the snap elections that followed

The focus of the 20th Amendment is basically to restore some powers back in the hands of the President and to rectify certain grey areas of the 19th Amendment.  The 19th Amendment (19A) to the Constitution was passed by Parliament with 215 voting in favour and only one against it. One MP abstained and seven others were absent on April 28, 2015 when it was put to vote in parliament.  It was an exercise undertaken by the 100-day Government formed under the leadership of the United National Party (UNP) shortly after Maithripala Sirisena was elected President at the elections concluded on January 8, 2015.

Undoubtedly, that Government rushed through the Bill titled ‘19th Amendment to the Constitution’. In fact, it was subjected to last-minute changes incorporated during the committee stage of the debate on April 28. The proceedings dragged on till midnight on that day mainly because the United People’s Freedom Alliance (UPFA), as the largest party, but sitting in the opposition, pushed the minority Government to the wall in pressing for the changes it desired.  The UPFA had to support the Bill in general because then President Sirisena, as the party’s newly appointed leader, wanted it.  A fair number of UPFP MPs remained loyal to former President Mahinda Rajapaksa who had just been defeated by Sirisena at the presidential elections and deposed from the party leadership thereafter.

But, they did not opt for an open, virulent confrontation with Sirisena fearing he would otherwise dissolve parliament, an act that would have left them reeling at the snap elections that followed.

Actually, the original draft of the 19th Amendment, if enacted, would have reduced Sirisena to a mere figurehead

In that Government, there were two power centres. The President belonged to the UPFA which was the alliance led by the Sri Lanka Freedom Party (SLFP).  But, parliamentary power remained in the hands of the UNP with its leader Ranil Wickremesinghe serving as the newly-appointed Prime Minister. In drafting the 19th Amendment, the SLFP had little say, though.  Really speaking, LSSP member Jayampathi Wickramaratne, who was later nominated as an MP on the National List, played a pivotal role in the evolution of the 19th Amendment in consultation with the others.  As a party, the UNP gave leadership to the whole exercise. Obviously, it had political considerations in mind when deciding on the content of the 19th Amendment. First of all, the constitutional exercise was aimed at scrapping the powers of  Sirisena as the Executive President to be vested with the Prime Minister or parliament for that matter. It was politically advantageous for the UNP to entrench its power at that time because the President was from a different party with contrasting policies.

Actually, the original draft of the 19th Amendment, if enacted, would have reduced Sirisena to a mere figurehead. No matter what, at the end the enacted version of the 19th Amendment pruned substantial powers of the Executive President.  Today, the President is unable to dissolve parliament after one year. He has to wait for four-and-a-half years to do it. His authority is drastically curtailed in the appointment of members to the Independent Commissions. The Constitutional Council has the power in this regard. In the original draft, there was a proposal to include five civil society representatives to it, but it was reduced to three at the intervention of the opposition at that time. If not for that, civil society nominees would have been able to supersede elected representatives in the appointment of members to the Independent Commissions.

As far as the transfer of presidential powers to the Prime Minister was concerned, the Mahinda Rajapaksa loyalists of the UPFA did not show much objection during the committee stage at that time though they had enough numbers to get some of the clauses knocked off.  They were involved in the ‘Bring Back Mahinda’ movement. Therefore, they were harbouring hopes that they would be able to make Rajapaksa an all-powerful Prime Minister to govern the country without much involvement of Sirisena as the president.

Political motivation was central to the enactment of the 19th Amendment in a hurried manner. The political parties did not have sufficient time for any meticulous study of it. As a result, the country had to grapple with many a contradiction during the actual implementation of it. The two power centres failed to see eye to eye on most issues, leading to indecision, and the 19th Amendment did not provide a way out.

Today, the new Government has worked out the 20th Amendment – that is to   give more authority to the President. If enacted, it would reintroduce constitutional provisions for the Government to enact urgent Bills.

The enactment of the 20th Amendment is only one part of the government’s Constitution-making exercise. Afterwards, the Government will be heading for the evolution of a fully-fledged Constitution. In this instance, a public debate is now in progress. The Yuthukama organization, a nationalist movement that stands by the Government has initiated a series of seminars on the need of a new Constitution with particular emphasis on changing the 13th Amendment.

The 13th Amendment is a tricky area because it was incorporated into the Constitution consequent to the 1987 Indo-Lanka Accord. India has taken up the position ever since that the full implementation of the 13th Amendment should be the basis for a solution to the political question. Eyes are now open to how the government will proceed with this move, and how India will respond to it.

Samagi Jana Balawegaya (SJB) members Hirunika Premachandra and Mayantha Dissanayake have said their party was opposed to the annulment of the 13th Amendment. For them, the Provincial Council system is important from a personal point of view as well. They unsuccessfully contested the parliamentary elections. Now, they can target office in the next tier of government. Any change of the Provincial Council system would deny them any chance in this regard. So, their opposition to it is understandable.

Interestingly, Dissanayake is the son of late Minister Gamini Dissanayake who advocated for the Indo-Lanka accord.

(The featured image at the top Sajith Premadasa, Gotabaya Rajapaksa and Ranil Wickremesinghe who will now fight over the 20A inside and outside parliament)