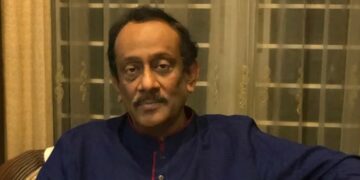 Bangladesh must be realistic and go forward in a controlled manner, says former Foreign Secretary

Bangladesh must be realistic and go forward in a controlled manner, says former Foreign Secretary Dhaka, April 11 (Prothom Alo): Md Shahidul Haque, former Bangladesh Foreign Secretary, is now senior fellow at North South University’s South Asian Institute of Policy and Governance. He is involved in writing and deliberating at home and abroad on the Rohingya crisis, geopolitics and connectivity. In recent times, public interest has been generated in the geopolitics of the US and China, as well as in projects to expand connectivity. Md Shahidul Haque speaks at length on these issues in an interview with Prothom Alo

Q: A virtual summit of Quad leaders was held at the initiative of US president Joe Biden. In the context of containing China, has any new dimension emerged in geopolitics after the summit of the top leaders of the US, Japan, India and Australia?

Ans: These four countries had cooperation from beforehand and they have reached a consensus to consolidate this further. While these four countries talk about commitment for a developed and prosperous world as well as free and open oceans, it is undeniable that that their end objective is to contain China. They want to be able to jointly tackle any possible natural disaster as the Sea Angels did in the past. This summit is part of the move to place priority on Asia.

These countries feel that they must take a position in-between the two oceans. If they can do this, the entire world will be in their control. Similarly, China feels that this continent is theirs. The problem for China is that it stands alone. Those who side with China, are not openly doing so. Overall, China is still considerably lagging behind the US, and definitely so where maritime strength is concerned.

Q: So the summit of the top leaders of Quad is a continuity of an ongoing initiative?

Ans: The Quad summit was basically to consolidate the previous process. And after taking over as US president, Joe Biden has announced the strong leadership of his country on the world stage. The White House is placing emphasis on its Asia policy. The Asia-Pacific is at the center of the US Asia-centric policy. Joe Biden has made it clear that while the values of the Democrats’, such as democracy, human rights and so on will be upheld, the US will remain a maritime superpower.

The implementation of China’s Belt and Road Initiative (BRI) is quite visible, but the US Indo-Pacific Strategy (IPS) is quite vague.

The IPS process is undoubtedly strategic. And the objective of China’s BRI is to fund the mega projects of various countries and draw them into its orbit. It aims to fund mega projects in various countries and involve these in the BRI plan. In other words, a country will join up with China through its development initiatives. So these two parties have very different methods. The IPS concept is for a strategic alliance. It will also include mega projects as far as possible. But the money being provided through BRI to various countries is credit, not grants. At the same time, it is also true that till now there have been no funds in IPS.

Q: China has shown the Padma bridge railway project to be part of their BRI plan. An agreement regarding BRI was signed with Bangladesh while you were the foreign secretary. Has there been any discussions before the agreement, or after, about this project being a part of BRI?

Ans: China hadn’t mentioned that beforehand. Wherever China is taking up mega projects now, they are projecting these as part of BRI. This is an afterthought. But it had never brought this to the discussion table.

Q: In 2014 Bangladesh had agreed to join up with Japan’s BIG –B. And in 2015 the matter of the Matarbari power project was finalised. For two years Japan has openly been saying that Matarbari is part of the BIG-B initiative. And this is part of the IPS. Hadn’t Japan brought this up in discussions earlier?

Ans: No, Japan too did not do so. It began claiming this towards the end of 2019. However, in 2017 we understood that Matarbari would eventually become a seaport. The communications at various times with our mission had made this clear.

Q: Does the China and Japan experience prove that before taking up any mega project and joining up with the initiative of any country, Bangladesh needs to plan and determine its strategic position first?

Ans: It certainly must do so. We mostly view our mega projects on an ad hoc basis. We fail to take into consideration whether these projects are actually part of any geostrategic plan. We must always keep in mind that it’s not about charity, it’s all about business and geopolitics.

Q: In the case of IPS, business is the priority. It does not have any elements of security and defense. Yet the US has a USD 300 million fund for security aid under the IPS. How do you view that?

Ans: This is nothing new. It is a part of the US bargaining strategy. Perhaps we failed to understand. Or perhaps our need was so great that we thought it was no problem. We will stay with BRI. And we will stay with IPS too. This area wasn’t given importance at the time. But now it must be looked into.

Q: It is being said that in its relations with Bangladesh, Washington has always viewed Dhaka through Delhi’s eyes. Is this true?

Ans: I never felt this to be true. During discussions with Washington, when regional relations were discussed, the context of India, Pakistan and Sri Lanka was raised. I observed that the US was aware that Bangladesh had its own stance and that was not always one with India. For example, when US wanted to draw us into IPS, they spoke about Bangladesh’s gains and benefits. They didn’t drag India into the picture.

Q: As the government came into power again, towards the end of 2018 the foreign ministry had discussions among themselves about Bangladesh stance concerning BRI and IPS. Was anything finalized?

Ans: In March 2018, Bangladesh’s embassy in Washington informed us that Bangladesh needed to carry out a study to determine its stance on the basis of developments in IPS and BRI. A presentation was also made at the prime minister’s office that year about what we should do. It was said that we will remain in both initiatives, with trade and commerce being at the center. But we will not enter into any defense initiative. We realized that we had become important due to our geographical location as well as our population. Bangladesh’s market has an importance. We must keep this in mind when determining our strategy.

Q: But it does not seem that Bangladesh has adopted any clear stance in this regard so far?

Ans: I do not know about this either. I hear a few people’s statements about BRI and IPS, but the actual situation is not clear. After the Quad’s virtual summit, I feel that it is important for Bangladesh to determine its strategic and long term stance.

Q: During the Mujib Chirantan events, Bangladesh gave priority to connectivity in its talks with the top leaders of five countries including India. Bangladesh is placing emphasis on sub-regional connectivity with India, Nepal and Bhutan. Does Bangladesh have the capability and competence to manage the matter?

Ans: In the South Asian context, connectivity must be seen in a holistic manner. Historically speaking, connectivity is nothing new in the region. Before the partition of the subcontinent, the countries of the region were connected with each other in varying degrees. There was an element of variety involved in this connectivity. With this in mind, the revival of connectivity must be viewed in the social, political and economic context.

There can also be an evaluation of whether the steps taken by Bangladesh were adequate and effective in consideration of its capabilities and strength. There is no room for any excesses. There is no room for over confidence. Bangladesh must go forward in a controlled manner, taking reality into consideration. Bangladesh must take all quarters into confidence when taking up any sub-regional or international initiative, connectivity or mega projects.