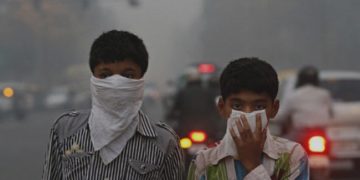 Vulnerable people are advised to be mindful of the unhealthy air quality expected in the Colombo area in the coming days especially on January 28, 29 and 30. He said this unhealthy condition was due to the climatic changes consequent to the prevailing dust storm at the Bengal atmosphere.

People with heart or lung diseases, children, older adults and people who are active outdoors are considered to be among the vulnerable group.

“The same condition was experienced yesterday as well and according to data on Air visual. com, Colombo might experience a condition of another unhealthy air quality situation on January 27, 28 and 29 as well,” Mr Premasiri said.

“Vehicle emissions and other gaseous emissions released by others, do not move up and away but remain at ground level due to the prevailing low pressure resulting in air stagnation conditions,” he said

According to U.S. Environmental Protection Agency, when Air Quality Index (AQI) values are between 101 and 150, members in the sensitive groups might experience health effects, but the general public is unlikely to be affected.

“People with heart or lung diseases, children, older adults and people who are active outdoors are considered sensitive are therefore at greater risk,” it states. (Sheain Fernandopulle)