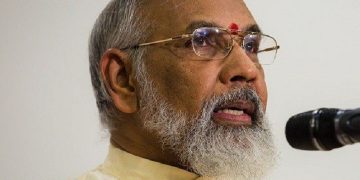 “The Tamil people are of opinion that reconciliation is possible only on the basis of equality based on respect for international norms and procedures," the Tamil Makkal Thesiya Koottani leader said in a missive to UNHC for Human Rights, Michele Bachelet Colombo, September 22 (ENCL):  C.V. Wigneswaran MP and leader of the Tamil Makkal Thesiya Koottani (TMTK) has said in a letter to Michelle Bachelet Jeria, the UN High Commissioner for Human Rights, that Sri Lanka’s  statecraft is a potential threat to regional peace and development.

“The record of successive administrations demonstrates clearly that the developments you have identified are intrinsic to Sri Lanka’s model of governance. This country’s means of statecraft poses a potential threat to peace and sustainable development in the region,” Wigneswaran told Bachelet.

Referring to the High Commissioner’s statement of 14 September, the former Chief Minister of the Northern Province said that the Tamils sincerely appreciate her understanding of the “Sri Lankan government’s disturbing tendencies—towards lack of institutional independence; appointments of military officials to civilian offices and lack of accountability regarding those officials’ alleged roles in war crimes, crimes against humanity  and genocide.”

These trends are not the failure of a particular Presidency but have been the case right through, he added.

“The Tamil people are of opinion that reconciliation is possible only on the basis of equality based on respect for international norms and procedures. This includes the cardinal precept enshrined within Article 1 of the UN Charter — that international peace and security are inextricably linked with the equal rights and self-determination of Peoples,” he said.

“The OHCHR’s attention to Sri Lanka thus presents a renewed mandate to the international community to preserve peace and security. The Tamil people would be a willing and able partner in these efforts,” Wigneswaran stated.