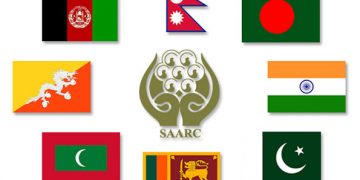 Why dismissing SAARC revival is premature

Why dismissing SAARC revival is premature

Despite India-Pakistan spats, SAARC members find the association a useful forum and platform Amidst the global health emergency of a fast-spreading coronavirus, the South Asian Association for Regional Cooperation (SAARC) came back to life a few weeks ago after being declared dead in 2018. The South Asian countries conducted a video conference on the suggestion of Indian Prime Minister Narendra Modi to chalk out a collective strategy for the containment of the virus in the region. Despite this positive move, most analysts expressed pessimism about the revival of the regional organization. They particularly pointed to Pakistani State Minister of Health Dr Zafar Mirza calling attention to the lockdown in Jammu & Kashmir during the conference call as a reminder of broader unresolved political issues that would continue to impede any effort toward regional cooperation within the grouping.

While challenges to peace and stability in South Asia cannot be denied, dismissing SAARC’s potential for revival is short-sighted. Though India-Pakistan tensions would continue to be an obstacle, both New Delhi and Islamabad have reasons to keep SAARC alive since the grouping offers them certain opportunities that other channels do not. For India, SAARC can be an effective example of its regional leadership while for Pakistan, SAARC is a way out of its diplomatic isolation.

Prime Minister Modi’s invitation to the SAARC leadership for a video conference on COVID-19 was an unexpected move after Indian leaders’ persistent refusal to attend the SAARC summit in Pakistan for the past four years. More broadly, India seemed to have given up on SAARC in the last few years and began focusing instead on sub-regional organizations without the presence of Pakistan, like the Bangladesh, Bhutan, India, Nepal (BBIN) Initiative and the Bay of Bengal Initiative for Multi-Sectoral Technical and Economic Cooperation (BIMSTEC), achieving some success. Then why did Modi chose SAARC over BBIN and BIMSTEC to coordinate COVID-19 efforts?

Though India-Pakistan tensions would continue to be an obstacle, both New Delhi and Islamabad have reasons to keep SAARC alive since the grouping offers them certain opportunities that other channels do not.

An explanation could be that as Modi seeks to transform India into a leading power, this global tragedy offered him an opportunity to showcase India’s leadership in the region. Such an effort at the sub-regional level might not have given Modi the desired limelight. SAARC was a better choice due to its political visibility outside South Asia, particularly at a time when India’s global image was tarnished by domestic protests against the Citizenship Amendment Act. Modi’s strategy paid off when his regional conference call initiative received praise internationally. The video conference also served to put Pakistan in a defensive position, shifting the pressure for not cooperating with SAARC from India to Pakistan.

The COVID-19 video conference shows that SAARC still holds some utility for India. For one, Prime Minister Modi is an ardent supporter of South Asian integration and regionalism. Since his election in 2014, he has highlighted building stronger ties with neighbors as an important element of his foreign policy. And while it is true that India has made important economic strides through BBIN and aims to build stronger connectivity through BIMSTEC, these sub-regional bodies cannot replace SAARC since it is the only grouping that represents the whole subcontinent. Furthermore, as the longest-running of the three organizations, SAARC brings established mechanisms for dialogue and concrete accomplishments. Besides, SAARC offers opportunities to connect with three strategically important regions, Central Asia, the Middle East, and South East Asia, something BBIN and BIMSTEC do not. Moreover, even if India might be more interested in BIMSTEC and BBIN, its regional partners such as Nepal, Sri Lanka, and Bangladesh have all stressed the importance of SAARC and indicated support for its resuscitation.

Thus, the need to emphasize its regional leadership and the importance of SAARC to its partners could act as factors motivating India to keep SAARC alive and complementary to other sub-regional organizations.

SAARC as an Antidote to Pakistan’s Diplomatic Isolation

Pakistan has been trying to revive SAARC for the last few years without much success. In fact, the last SAARC summit was to be held in Pakistan in 2016 but it did not materialize as some member states led by India boycotted the event following the Uri attack. However, despite recent tensions with India, Pakistan did not refuse Prime Minister Modi’s invitation to attend the SAARC video conference to discuss the region’s coronavirus response. Some have questioned Pakistan’s commitment to SAARC because Prime Minister Imran Khan decided to skip the video conference and sent his health minister to attend in his stead. However, that decision was a function of politics and does not indicate Pakistan’s indifference to SAARC. After the Pulwama/Balakot crisis, the Indian government’s withdrawal of Article 370 from Jammu & Kashmir, and the recent communal violence in Delhi, Pakistan has been very critical of India and called it out diplomatically. Thus, lest his joining the COVID-19 video conference face domestic opposition for being soft on India, Khan chose not to attend. However, Pakistan’s efforts to host a ministerial meeting on COVID-19 and its decision to contribute to the emergency fund shows it is serious about SAARC.

India’s drive to showcase its regional leadership, Pakistan’s compulsion to revive its diplomatic standing, and other SAARC member states’ continued commitment to the grouping keep the possibility of SAARC’s resurrection alive.

This is because Pakistan needs SAARC as a foreign policy tool to rebuild its ties with South Asian countries and to resolve its bilateral issues with India through the support and intervention of other member states. This need arises due to the shift in South Asia’s political dynamics recently, with South Asian countries such as Bangladesh, Maldives, and Sri Lanka having moved closer to India and leaving Pakistan isolated. A key example of this “diplomatic defeat” was the cancellation of the 19th SAARC summit when many South Asian states joined India in refusing to attend the summit in Pakistan. Pakistan has also not received much support from SAARC countries in its recent efforts to raise the Kashmir issue at the global level. Thus, seeking to restore a balance of power in the region may push Pakistan to continue engaging with SAARC.

The Pakistan-China relationship could also be a factor driving this engagement. China is an observer in SAARC and is dependent on Pakistan to promote its interests in the organization. Pakistan’s proposals to increase the role of observer states in SAARC, to expand the membership of the regional forum, and to involve China in SAARC’s COVID-19 initiatives should all be seen in this context.

Thus, the revival of SAARC would not only allow Pakistan an opportunity to rebuild its standing in the region but also help maintain its strong relationship with China and the benefits that brings.

The Future of SAARC

SAARC has also served as a key platform to melt the ice between Pakistan and India in the pastIndia’s drive to showcase its regional leadership, Pakistan’s compulsion to revive its diplomatic standing, and other SAARC member states’ continued commitment to the grouping keep the possibility of SAARC’s resurrection alive. To be sure, the India-Pakistan rivalry would continue to be an irritant. However, the rivalry has existed since the creation of the organization and despite delays and stalemates, the two countries have kept coming back to SAARC to achieve specific national interests. In fact,,be it the fourth summit that brought an Indian leader to Pakistan after 28 years or the 18th summit that began with India-Pakistan tensions but ended with the leaders of the two countries publicly shaking hands at the closing ceremony. It remains to be seen whether the upcoming 19th summit turns into an opportunity for an India-Pakistan dialogue but what is clear is that pronouncing the grouping dead is premature.

The author Fizza Batool is a doctoral candidate in the Department of International Relations at the University of Karachi in Pakistan. Her doctoral research involves the identification of factors contributing to political participation in illiberal democracies. She is also an Adjunct Faculty at Iqra University and has recently served as a Senior Research Fellow at the Centre for Peace, Security and Developmental Studies (CPSD) – a non-profit policy think-tank in Karachi. Her main research interests include Political Participation, Voting Behavior, and Comparative Politics.