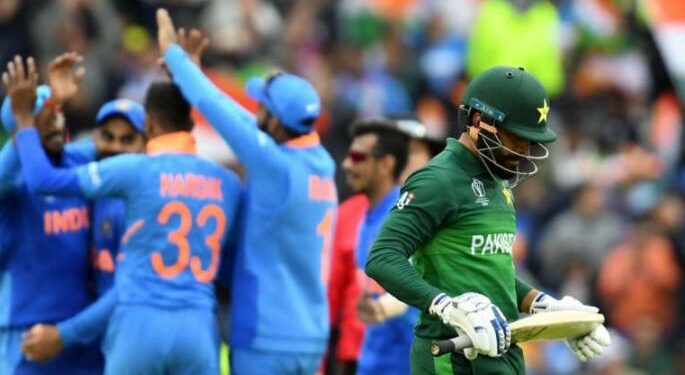 Oct 24 (BBC) – India and Pakistan will meet on Sunday in the Twenty20 World Cup in a contest that remains one of sport’s biggest games and bitterest rivalries.

The arch-rivals rarely play outside of major tournaments due to political tensions. India has won all seven of their clashes at the World Cup stage. They last met at the 2019 World Cup in England.

Here are the top five matches between the two sides.

This quarter-final game in India’s Bangalore city is a fan-favourite.

India batted first and put 287 runs for 8 wickets on the board. Navjot Singh Sidhu scored a solid 93, and Ajay Jadeja hit 45 runs off just 25 deliveries.

What followed next is regarded as one of the most iconic moments in the India-Pakistan rivalry.

Sohail smashed the ball to the boundary, walked up to fast bowler Venkatesh Prasad and pointed his bat at the fence, egging Prasad on.

In the next delivery, Prasad got his revenge when the ball veered and hit the off-stump, dismissing Sohail. The crowd erupted as Prasad ran down the pitch, celebrating the wicket.

India won the match by 39 runs and knocked out Pakistan from the tournament.

The game at South Africa’s Centurion is widely remembered as one of the most memorable contests between the two sides.

Helped by a Saeed Anwar century, Pakistan put up a challenging total of 273 runs.

But India had Sachin Tendulkar, who put on a batting masterclass, smashing boundaries and fighting cramps to score a blistering 98 runs off 75 balls.

READ: What happens if a player tests positive in T20 World Cup

India were not favourites to win the tournament. The format was new and the mainstays of India’s formidable batting – Sachin Tendulkar, Saurav Ganguly and Rahul Dravid – had pulled out.

There was considerable pressure on Dhoni as India had been humiliated at the 2007 World Cup earlier that year, losing to Bangladesh and then Sri Lanka.

India batted first and scored 157 runs. But it was Dhoni’s decision to give the last over of the match to a fairly unknown bowler, Joginder Sharma, that made India’s cricket fans hold their breath.

Misbah-ul-Haq was on strike. Pakistan needed 13 runs of 6 deliveries, chasing 158 for victory in a nail-biting last over.

Sharma conceded a six in the first two balls of the over as spirits sank on the Indian side. Dhoni kept Sharma calm.

With just six runs needed to win off four balls, Misbah scooped the ball only to find the secure hands of S Sreesanth, giving India the victory.

After beating Australia in a riveting quarterfinal, India marched into the semi-finals against Pakistan in the Indian city of Mohali.

It was the first time the two sides were playing each other since the 2008 Mumbai terror attacks, which left 166 people dead and soured ties between the neighbours. India blamed Pakistan-based militant group Lashkar-e-Taiba for the attacks.

Considered the “mother of all battles”, the prime ministers of both countries were in attendance.

India won the toss and elected to bat. Sachin Tendulkar and Virender Sehwag got off to a flying start.

Sehwag was dismissed in the sixth over. Tendulkar was dropped by Pakistan’s errant fielders four times. He went on to score 85. Suresh Raina hit 36 to bring the score to 261.

Pakistan opened with Mohammed Hafeez who put 43 on the board but India put the pressure on with its bowling attack and tight fielding.

India put up a huge target of 336 runs for 5 wickets for the Pakistani side at a rainy Old Trafford in Manchester.

Sharma continued to dominate Pakistan’s bowlers as he put up 140 runs off 113 balls. Captain Virat Kohli also hit a neat 77 runs off 65 balls.

Pakistan’s Fakhar Zaman and Babr Azam put on a fight, hitting 62 runs of 75 balls and 48 runs off 57 balls respectively.

Kuldeep Yadav dismissed both the batsmen. The rain-hit match which was delayed many times ended with a comfortable win for the men in blue.