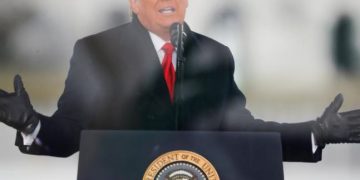 U.S. President Donald Trump speaks during a rally to contest the certification of the 2020 U.S. presidential election results by the U.S. Congress, in Washington, U.S, January 6, 2021. REUTERS/Jim Bourg

Washington, January 9 (Reuters) – U.S. President Donald Trump said he will look at building his own platform after Twitter suspended him on Friday, citing a risk of further incitement of violence following the storming of the U.S. Capitol on Wednesday by hundreds of his supporters.