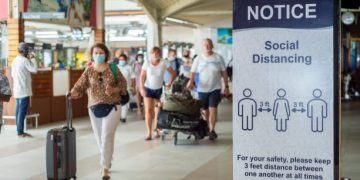 Colombo, December 20: Tourism is booming in the Maldives in the midst of COVID cases. Despite the pandemic, the Indian Ocean archipelago received its 100,000 th. tourist this month since the tourism sector began to be opened up in July.

Maldives reopened its borders to international passengers on July 15, after nearly four months. Guesthouses were permitted to resume operations and kick start local tourism on October 15.

Although Maldives has noted a significant reduction in tourist arrivals compared to pre-COVID figures, there has been a gradual increase with the establishment of travel bubbles between Maldives and other countries, as well as greater connectivity in terms of flight operations, local media reported .

At present, over 18 airlines are managing flights to and from Maldives. It is anticipated that Maldives will reach peak arrival rates during the year of 2021.

In addition to lifting curfew hours, the quarantine period was reduced to 10 days. Mandatory quarantine for locals returning to Maldives and for locals travelling to resorts were abolished.

Over the last month, Maldives’ has observed a decline in the number of individuals testing positive for COVID19, with daily records indicating an average of 50 cases per day.

Over 600 guest houses and 150 resorts were in operation in the Maldives prior to border closing. The total number of beds available at the facilities were over 50,000. Out of these, 38,645 beds are now in operation.

Russia is one of the biggest markets for Maldivian tourism. According to statistics released by the Tourism Ministry, 46,065 Russian tourists have visited the Maldives since the archipelago reopened its borders in July until December 13. This is equivalent to ten percent of total arrivals in 2020, and 20.7 percent of tourism arrivals post border reopening. The increase in the number of Russian tourists is mainly due to the increasing number of airlines operating to the Maldives from the Russian region.

19 airlines are currently operating to the Maldives. The country is registering over 4,000 daily arrivals.