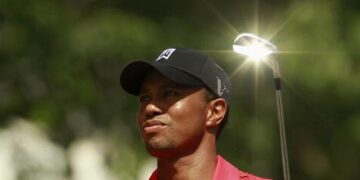 ‘Tiger’ movie review: A cautionary tale of a flawed champion

‘Tiger’ movie review: A cautionary tale of a flawed champion Chennai, January 29: During the heights of his early success as a professional golfer, Tiger Woods was asked by Oprah Winfrey to explain his parentage. “Cablinasian” came the reply, an amalgamation of Caucasian, Black, Indian and Asian. Tiger’s life has been as complicated and compelling as that concoction above.

From the time he announced himself as a two-year-old prodigy till his epic comeback win at the 2019 Augusta Masters, Tiger’s life has come a full circle. Here are some of the tags and episodes he’s had to deal with in that time – non-white American golfing sensation, “Michael Jordan in long pants”, major championship trophies, Grand Slams, extra-marital affairs, public and media shaming, divorce, surgeries galore, car accident, arrest for reckless driving, comebacks from the brink. Tiger Woods is that award-winning scriptwriter who never was.

Tiger Woods is awarded the Presidential Medal of Freedom, the nation’s highest civilian honor, by U.S. President Donald Trump in 2019

A HBO documentary film Tiger, spread over two parts and over three hours long, covers his incredible life as narrated by people who knew him: friends, caddies, pro golfers, journalists, former girlfriends, mistresses. However, Tiger and his family do not lend their voices to this film, which is probably its only weakness. Archive interviews, talk-show segments, press conferences have been cobbled together to substitute for this. Precious home videos of his childhood give a glimpse of the making of Tiger, and his complicated relationship with his father, Earl Woods.

In part one, the film focuses on two broad themes – race and parenting. As a teenager, Tiger cut one interviewer short and declared he would be bigger than golfing legend Jack Nicklaus. The fact that he is black would only add to his aura.

He was right. Golf was a bastion of Caucasian America, as Sports Illustrated journalist Gary Smith said in the film. Tiger arrived as a new ‘black’ hope storming a white, elitist sport by defeating Nick Faldo at the prestigious Masters at Augusta, Georgia in 1997. A Nike commercial played the race card, with Tiger narrating instances when he was not allowed inside certain clubs, bringing back memories of the bad old days of segregation.

Sensing Tiger’s gift for golf, Earl wanted to package Tiger as a champion and a messenger of hope and peace, like Mahatma Gandhi or Mandela. In the greens and at home, it was all about golf.

While Earl and wife Tida’s parenting successfully raised a driven champion, it didn’t necessarily prepare him for life’s other challenges, according to his former girlfriend Dina, who features extensively. Dina’s home videos show Tiger letting his hair down at parties, part of her quest to convince Tiger that there’s more to life than golf. Yet, his parents saw her as a threat to their quest and the relationship came to an abrupt end.

After the passing of his dad Earl in 2006, Tiger’s fortunes in his life and career see-sawed

Tiger’s extra-marital affairs could also be traced to his own father’s infidelity. It affected Tiger emotionally but after Earl’s passing in 2006, Tiger’s fortunes in his life and career see-sawed. Tiger’s fascination for the Navy Seals came from Earl, an army man who served in Vietnam. Taking part in combat drills, jumping off planes was like a escapism for Tiger, who risked career threatening injuries. It may have contributed to him having to go under the knife several times years later as he planned for a comeback.

Without a strict dad looking on, Tiger’s personal life started spiralling out of control as he made trips to Las Vegas, some with Michael Jordan in tow. A socially awkward Tiger asked his friends how they chat up women, and all they said was: “Just tell ‘em you’re Tiger Woods!”

Ironically, Tiger ended up doing what he loathed about his father and it was a matter of time before the tabloids pounced. What happened in Vegas could never just stay in Vegas, in Tiger’s case. Some of Tiger’s mistresses who came out later were convinced that he loved them, and the few who spoke for this film spoke about how emotionally draining it was to recall those memories.

Close friends and his long-serving caddie Steve Williams show little bitterness on camera despite Tiger cutting them off his life so unceremoniously in the years after his divorce from wife Elin Nordegren.

Tiger’s wish to live a normal life in an abnormal world grew more delusional as his fame grew, and his friends felt a sense of pity and understanding that it was not easy being him.

The film tries to strike a balance between Tiger the champion and Tiger the flawed hero, though the part two focuses on the latter, unapologetically. The uncomfortable truth for Tiger and his fans is that his sexual escapades will linger on in memory. However, Tiger’s jaw-dropping moments in golf and championship wins get their due. Yet over three hours of film, thoughts on his personal life and upbringing provoke questions. Did Tiger fail his fans? Did the whole of America fail him?

The film is a cautionary tale of what can go wrong when stars fail to manage their fame. However, until Tiger narrates his version, opinions may still be divided on his legacy.

The hit single Eye of the Tiger by the American band Survivor has these lines from the chorus:

“It’s the, eye of the tiger it’s the thrill of the fight,

“Rising up to the challenge of our rival.”

Tiger dominated some of golf’s biggest names. Ultimately though, his biggest rival, was himself.