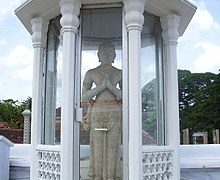 Sri Lanka’s ethnic and language issues as seen by historians

Sri Lanka’s ethnic and language issues as seen by historians

In his seminal work, The Evolution of an Ethnic Identity: The Tamils of Sri Lanka: C 300 BCE to C 1200 BCE (The South Asian Studies Centre, Sydney 2005), Prof K Indrapala says that the present-day territories of Sri Lanka and South India comprised a single region in which the pre-historic ancestors of Sri Lankans and South Indians roamed freely. At that time, the sea was not a divider but was a unifier. It was not a surprise that Sri Lanka’s ethnic/language issue was raised in on the very first day of the 9 th. Sri Lankan parliament on August 20 by C.V.Wigneswaran, the lone member of the radical Tamil Makkal Thesiya Koottani (TMTK). The issue was his stock in trade. And as expected, his speech kicked up a controversy. In his brief speech, he asserted the Tamils’ right to “self-determination” as per an international convention. He gave a grim warning about the consequences of following Sinhala majoritarian policies, and to top it all, asserted that Tamil is the original language of Sri Lanka.

“I start my felicitations, Honorable Speaker, hailing you in my mother tongue (Tamil), the oldest living language of this world and the language of the first indigenous inhabitants of this country, and proceed in the link language,” Wigneswaran in the opening para.

The Samagi Jathika Balawegaya (SJB) MP, Manusha Nanayakkara, demanded that Wigneswaran’s speech be expunged from the Hansard, and the Minister of Energy Udaya Gammanpila challenged Wigneshwaran’s claim about Tamil’s antiquity. The ruling coalition’s MP  claimed that the Tamils themselves believed that the Tamil language was born around the 3rd century BC and that according to linguists, Greek, Arabic, Chinese and Basque languages were the oldest languages in the world.

Historians Not So Cut and Dry

However, historians and archaeologists do not have such cut and dry views. Renowned Sri Lankan historians and archeologists like K Indrapala, Siran Deraniyagala, Leslie Gunawardena and Sudarshan Seneviratne contend that Sri Lanka has been multi-ethnic and multi-cultural from prehistoric times. They say that the Sinhalas and the Tamils are from the same “South Indian-Sri Lankan (SISL) gene pool.” They reject the “mass migration” or “invasion theory” so popular among colonial and post-colonial historians. Invasions have not been the dominant mode of movement, they say. According to these scholars, people, cultures, languages, religions, artifacts and technologies moved in small ways from place to place over long periods of time. And these movements were not always been in one direction as ethno-religious extremists think.

In his seminal work, The Evolution of an Ethnic Identity: The Tamils of Sri Lanka: C 300 BCE to C 1200 BCE (The South Asian Studies Centre, Sydney 2005, Prof K Indrapala says that the present-day territories of Sri Lanka and South India comprised a single region in which the pre-historic ancestors of Sri Lankans and South Indians roamed freely. At that time, the sea was not a divider but was a unifier.

The Tamils have been in the island of Sri Lanka since long, Indrapala says. “The earliest inscriptions and the early Pali chronicles attest to the presence of the Tamils (Damedas/Damelas) in the EIA (Early Iron Age). The Demedas in Sri Lanka in the centuries BCE (Before Common Era or AD) need not, therefore, be considered as outsiders,” he asserts.

The Ila (or Hela or Sila as the ancient Sri Lankan inhabitants were known) moved back and forth between Sri Lanka and South India just as the Demeda or Demela (Tamils) did.

“The idea of looking upon the Demedas as aliens was surely not prevalent in the Early Historical Period (EHP),” Indrapala says,  pointing out that the earliest Sri Lankan chronicle, Dipavamsa, does not refer to the Damila rulers of Anuradhpura, Sena and Guttaka, as invaders. Nor does the Mahawamsa, the most important ancient Sinhala chronicle. The Mahawamsa describes Sena and Guttaka as ‘sons of a horse-freighter’ (assanaavikaputta). Furthermore, Sena and Guttaka, who had ruled Anruradhpura for 22 years, were described in the Mahavamsa as having ruled “justly”, Indrapala says.

Although the Sinhala hero, Duttagamini or Duttagemunu fought and eliminated the Tamil prince, Elara, the Mahawamsa had portrayed Elara as a just ruler.   Duttagamini admired Elara for being just to friend and foe alike. After building a memorial for the Tamil prince, Duttagamunu asked Sinhala Buddhists to worship at the place.

Sinhala and Tamils kings of Sri Lanka and South India cooperated in peace and war, the historian says. It was not uncommon for a Sinhala king of Anuradhapura to seek the help of a Tamil prince in South India in war or to gain a throne. Sinhala kings routinely recruited Tamil mercenaries from South India. Many of these settled down in the island. Likewise, Sinhala princes aligned with Tamil Nadu rulers in the latter’s internecine wars. In the reign of the Sinhala king Sena II (853-887 AD) a Sinhala army sided with the Pallavas and defeated the Pandya king. The Sinhala king placed his favorite Pandya prince on the throne in Madurai. Later, after the ascendancy of the Cholas, the Sinhala kings sided with the Pandyas to contain the aggressive Cholas.

In times of peace, the Sinhalas of Sri Lanka and South Indian Tamils cooperated in a variety of activities including the building of the irrigation tanks in Anuradhapura and Trincomalee. Leslie Gunawardane has written extensively on South India Sri Lanka SISL) cooperation in irrigation works. Tamil merchants in Sri Lanka contributed their mite to the building of these facilities. According to archaeologists, Megalithic folk from South India had brought to Sri Lanka the domesticated rice plant and taught Sri Lankans the use of iron.

“Sanskritzation”, which is the adoption of North Indian Sanskritic linguistic, religious, cultural and social traits, has been a unifier both in South India and Sri Lanka. However, Sanskritization touched the Sinhalese more. According to Indrapala, the harbingers of Sanskritization were Brahmin and Kshatriya immigrants. Sinhala rulers adopted Sanskrit names, traced dynastic links to North Indian ancestors; made Brahmins their  spiritual gurus and political advisors; and gave gifts of land to create Brahmin villages called Brahmadeyas. The Buddhist rulers of Anuradhapura unwittingly aided the Hindu/Tamil Saivite movement by patronizing Brahmins and Hindu temples.

Buddhism was also a unifier. In the period before aggressive Chola Saivism, when Buddhism was a major religion in South India, including Tamil Nadu, many Tamil Buddhist monks, with knowledge of Prakrit and Pali, were closely interacting with Sri Lankan monks and contributing to the corpus of Buddhist literature. In a major Buddhist university in Hikkaduwa, knowledge of Tamil was considered essential.

According to Indrapala, it was not until 1200 AD that the Sinhalese and Tamils emerged as distinct ethnic groups identified with distinct territories – the Tamils identified with the North and the East, and the Sinhalese with the rest of the island. Eventually, the geographic proximity of North  Sri Lanka to South India resulted in South Indian culture, language and practices having a greater influence in the Sri Lankan North (and East) than in the South.

There was also a process of cultural, linguistic, religious and ethnic assimilation which was going on and is still going on. The Tamils who lived in the southern parts of the island were assimilated into the Sinhalese population. In a parallel movement, the Sinhala speakers living in the North and East, were assimilated by the dominant Tamil ethnic group, Indrapala says.

He argues that through a process of language replacement, the north Indian Prakrit dialects spread among the vast majority of the people in the Center and the South paving the way for the evolution of Sinhalese, while Tamil became the dominant language in some parts of the island leading to the emergence of Sri Lankan Tamil.

In the beginning, Buddhism was common to both the Sinhalese and Tamils. Later it got associated with the Sinhalese exclusively. In the 11 th.Century, the rule of the Cholas in the Coromandel Coast in South India paved the way for the rise of Saivism among the Tamils. Eventually, Buddhism disappeared completely among the Sri Lankan Tamils. Over time, religion, in addition to language, became a marker of ethnic identity, with Sinhalese speakers being identified with Buddhism and the Tamil speakers becoming identified with Hinduism or Saivism to be precise.