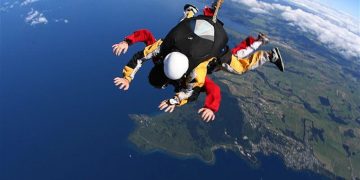 A group of 20 delegates representing 13 New Zealand companies arrived in Colombo on a 3 day visit aimed at forging business and trade links with Sri Lanka.

“Tourist arrivals from New Zealand grew by nearly 15 percent last year and we would like to see this robust growth continue in the next few years, especially in the high-end adventure tourism category where New Zealand is a world leader,” Tourism Minister John Amaratunga said.

“I believe Sri Lanka has much to learn from New Zealand Tourism and would like to see greater collaboration and also assistance in high end hospitality training and know-how on developing our own tourism assets which are of a similar nature and well suited for adventure tourism,” the Minister added.

Over the years New Zealand has developed expertise in food service and food production, environmental management, infrastructure design and development, as well as education and training.

The Minister further invited New Zealand companies to invest in Sri Lanka stating the fundamentals were now in place for strong economic growth.

Two-way trade between New Zealand and Sri Lanka has grown by 31 percent over the past three years and is now worth New Zealand Dollars 367 million.