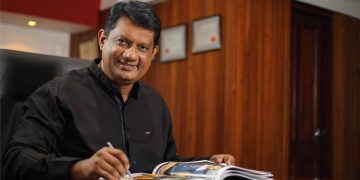 State Minister of Urban Development, Coast Conservation, Waste Disposal, and Public Sanitation Nalaka Godahewa and Secretary to the Ministry of Urban Development and Housing Sirinimal Perera broke ground on the project to build 700 housing units in the northern Colombo suburb of Applewatta.

“We have given the contractor a target to finish this project within one and a half years, and we believe and we trust they will do so,” Godahewa said.

“We have set some very ambitious targets and we are trying to find solutions for the housing problem very soon.”

Perera said that the project is scheduled to be completed and opened by July 2022, and that the government would extend full support for the contractor to finish construction on time.

“We thank AIIB for all the cooperation given to us. We are hoping to cooperate more and more with them in order to accomplish his excellency the president’s vision, which is that shelter is a right for everybody,” Perera said.

The construction is part of Sri Lanka’s Urban Regeneration Project and funded by an AIIB loan of 200 million U.S. dollars to build 5,500 units of affordable housing for low-income communities, which was approved in April 2019.

According to officials from China Railway 25th Bureau Group, the completed project will consist of three individual buildings with a total of 700 residences featuring a combination of one-bedroom and two-bedroom layouts. Enditem