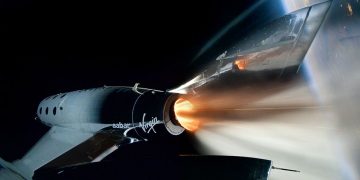 December 12 (BBC) – Virgin Galactic is set to carry out a milestone test flight of its rocket-powered tourist plane on Saturday.

This will be the first crewed flight of its reusable Unity vehicle to take off from the purpose-built commercial spaceport in New Mexico, US.

Already, more than 600 paying customers – including Justin Bieber and Leonardo DiCaprio – are booked to take a ride on the plane.

Saturday’s flight will be the first of three final demonstration flights before that commercial service begins.

It is on the third of these that Sir Richard Branson himself will test the service he’s been promising for 16 years. Before that can happen Virgin Galactic needs to go through some final preparatory steps.

They will run checks on all their plane’s operating procedures by making the first ever powered climb above Spaceport America, the centre that was developed specifically for this commercial operation by the New Mexico state government.

It has been a long road for the company’s engineers to get the technology to where they want it, and progress this year has, of course, been slowed by the Covid-19 crisis, with limited numbers of staff able to work both in New Mexico and at Galactic’s manufacturing base in California.

Will Whitehorn, president of the UK Space Industry Group, described the flight as a huge milestone.

“This is going to be a very safe and low-cost system,” he told BBC News. “Developing it has been ground-breaking and it hasn’t been easy.”

A fatal accident back in 2014 led to an investigation and the redesign of some elements of the system.

“But when it comes to space, you’re not in a race with anyone. You’re in a race to be safe,” said Mr Whitehorn.

The craft will also serve as an astronaut training facility.

“At the moment, we have to train them in simulated environments – swimming pools and so-called vomit comets, which are planes that dive out of the sky,” he explained.

“So as well as space tourism and space science, that training will be a crucial component of the industrial revolution that is coming to space.”

Virgin Galactic recently unveiled the design of the tourist cabin.

Passengers will sit in seats that move to manage G-forces in the different phases of flight – on the boost up to space and on the descent back to Earth.

They’ll get personal seat-back screens that display live flight data, and the 12 large windows – more than any other spacecraft in history, according to the company – are designed to ensure no passenger has to compete for a view when they unbuckle at the top of the climb to float free inside the cabin.

There will even be a big mirror at the aft end so they can see themselves weightless.