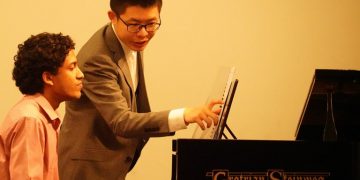 Western classical music, which was introduced to South Asia during British rule, was absorbed by a section of the local elite who were highly Westernized. But it is now a vanishing species, almost at the point of extinction.

Nationalistic forces across the region considered revival of indigenous cultural forms necessary to give their independence and nation-building movements an indigenous flavor and wider appeal. For this, Western influences had to be kept at bay.

Though major cities in India like Calcutta, Bombay and New Delhi boasted of having their own symphony orchestras and All India Radio had full time Western Music Producers in each of the major stations even after independence, audiences and competent players rapidly dwindled. Sponsors for concerts were hard to come by.

But paradoxically, the number of students learning Western music and schools training them for international exams increased. This was due to a change in Indian film music, which was becoming Westernized with orchestration improving in quality. With the masses lapping up the new sound, demand for players with Western classical music training increased in all film making centers in India. The emergence of bands in the 1960s also gave a fillip to Western music.

But Sri Lanka offers hope because it has been the most Westernized of the South Asian countries. Lanka had been under continuous European influence since the arrival of the Portuguese in 1505 till independence in 1948.

A section of the Lankan elite has doggedly maintained a link with Western classical music, despite the onslaught of cultural nationalism, lack of State funding and very limited private sponsorship.

Today, Sri Lanka is the only country in South Asia which still has a thriving symphony orchestra and a chamber music society. It still has world-class conductors. Young conductors and players are constantly coming up.
But the going has been tough says Lakshman Joseph de Saram, a leading violinist, conductor, internationally recognized composer and founder-Artistic Director of the Chamber Music Society of Colombo (CMSC).

Lack of Funding And High Tax

“Funding is the main problem,” Lakshman asserts. “While government support is nil, the corporate sector also does not respond to calls for sponsorship of our concerts, though there are notable exceptions like Dilmah and Fairway Holdings.”

“And if private companies do come forward, they thrust advertisements of their products on us. Commercial ads of cars or sausages do not go well with the dignity of classical music. Sponsors should fund us solely for the sake culture,” he asserted.

The exorbitant entertainment tax is a major stumbling block, Lakshman said. “The government not only does not give us any grants, but it taxes us heavily. Every ticket carries a 27% tax! The government does not understand that we are not making any money. We are driven by passion not profit. The least that it can do is not to hurt us or punish us,” Lakshman said angrily.

Asked if he had met the country’s top leaders, especially Westernised ones like Ranil Wickremesinghe, to sensitize them to the need to help a valuable cultural tradition to survive, Lakshman said he had met them, but to no avail. If the CMSC is still afloat and managing without a deficit, it is due to interest flowing from an Endowment Fund, he said.

Money is needed to hire halls, the piano and for paying players who are professional musicans. 25% of the players in CMSC are professionals. The rationale for engaging professional players is the need to ensure quality, and the CMSC is hell bent on ensuring top quality, Lakshman said.

“The CMSC has established itself as one of the critically acclaimed arts organizations in this region and is generally regarded as the most classical of classical music organizations, attracting the best musicians in the country.”

Lakshman himself is a thorough professional. He is a four-time recipient of the Signis International Award for an outstanding original score for a feature film. He is known internationally for his original scores for the film “Bel Ami” (the 2012 film starring Uma Thurman). The score, co-written with Rachel Portman, was nominated by critics as one of the 50 best Hollywood sound tracks written over the past decade. It got onto the world’s leading soundtrack label Verece Saraband’s 35 th. Anniversary Box Set.

Lakshman had his initial musical training in Colombo and then in New York where he performed too during his eleven year sojourn. He came back to Sri Lanka in the late 1990s and, progressing step by step, founded the CMSC in 2009 under the chairmanship of arts patron Mohan Tissanayagam.

What is remarkable about the CMSC is that it has an on-going musical education program. Through its Education Fund, it has given more than 5000 tickets to students from under-privileged backgrounds to attend high quality live performances, workshops and master classes free of charge.

In December, CMSC, with the help the Chinese embassy, brought the young piano maestro, Lu Yao, to play in Colombo and give tips to young aspirants. Lakshman said that Lu Yao belongs to a new crop of “hyper-viruosi” coming out of China. Trained at a school attached to the famous Central Conservatory of Music in Beijing, the 27 year old Lu Yao is already a professor at the Conservatory.

Lu Yao’s performance at the Lionel Wendt theater on December 19, showed complete mastery over the instrument bringing out both the subtleties and grandeur in the works he played. The awestruck audience could not but give him a standing ovation.

During his brief stay in Colombo, Lu Yao listened to some promising students playing and gave them tips about improving their playing. Avishka Wikramanayake (19), one of the students instructed by Lu Yao, said that the experience was “ inspiring.” The finer points that Lu Yao made took him to a “completely different level.”

Lu Yao himself took to music at the age of 5 due to the prodding of his strict parents who themselves were highly musical. They put him in a music school linked to the Central Conservatory of Music in Beijing and made him practice hard.

“It was boring to play the same passages over and over again. But I had no option but to do it, “ he said smiling. However, by by 11, Lu Yao had decided to become a professional pianist.

Asked how he developed his style of reflecting the mood of the piece through facial expressions while other concert pianists do not display any emotion, Lu said that he adopts this technique only when he plays before an audience. It is meant to draw their attention to the music.

“Of course, this is not liked by my teachers. When practicing, however, I am as straight faced and serious as others,” Lu Yao said laughing.

The Colombo concert was Lu Yao’s first in a developing country but he noticed that the audience here was as receptive as the ones in Europe. “I enjoyed playing with the CMSC sextet. Sri Lanka is a beautiful country. I want to come again,” he said.