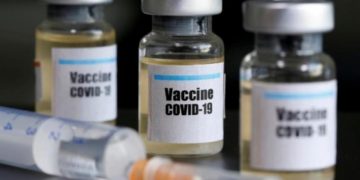 December 3 (Dawn) – Special Assistant to the Prime Minister on Health Dr Faisal Sultan has said that the government expects the first phase of coronavirus vaccine procurement in the first quarter of next year, as the federal cabinet approved $150 million for it.

“We cannot give an exact date of procurement but it will be in the first quarter of 2021,” he said, adding that it would be administered to people in stages with frontline healthcare workers being the first takers.

Accompanied by Minister for Information and Broadcasting Senator Shibli Faraz, Dr Sultan made this announcement at a press conference after the cabinet meeting on Tuesday.

After the frontline healthcare workers, the PM’s aide said, the Covid-19 vaccine would be administered to the elderly and population at risk besides other health professionals. Dr Sultan made it clear that the general public would receive the vaccine in the third stage. He explained that the stages of vaccine administration had been decided on the basis of the groups most at risk. He claimed that the vaccine would be available free of cost.

The special assistant said the government would consider multiple factors before procuring the vaccine, including its efficacy, safety and side effects, storage requirements, cost, manufacturer’s production capacity and Pakistan’s access to the vaccine.

Responding to a question, Dr Sultan said several companies working on the vaccine had been shortlisted and initial negotiations started.

“The government will bear the cost so that nobody is burdened; an amount of $150 million has been approved for vaccine’s procurement,” he said in reference to the Economic Coordination Committee’s recommendation in this regard.

The PM’s aide pointed out that the relevant authorities would request the government to approve more funds if required. The federal cabinet was requested to constitute a committee comprising four to five members to oversee the purchase of the vaccine, he said while referring to concerns about transparency in procurement of vaccine.

About Remdesivir, Dr Sultan said the medicine was not banned under the World Health Organisation (WHO) guidelines, rather its price had been reduced, he said. The price of Remdesivir – the drug being used for treating Covid-19 patients – has been reduced from Rs9,244 to Rs5,680.

Senator Faraz clarified that the prices of only 94 essential medicines had been increased in order to keep their supply stable.

Earlier, the cabinet meeting, which was presided over by Prime Minister Imran Khan, was informed that an investment worth $50 billion was expected in Bundal Island project for which $1.3 billion Memorandum of Understanding (MoU) had already been signed with some international firms.

While two islands on Karachi’s coast would be developed under the project, the Sindh government had opposed the development terming it an “illegal occupation of the Centre on provincial land”, said the information minister at the presser.

The media was informed that Mr Khan said Bundal Island project would not only fetch foreign investment but also create jobs for the people of Sindh, including fishermen, besides 10 million trees would be planted under the projects along with that of Ravi Riverfront Urban Development Project in Lahore.

The prime minister was determined to execute the development projects despite all hurdles as they would generate millions of jobs, control illegal activities and protect people from flooding, the minister said.

He recalled that the Sindh government had first issued a no-objection certificate for Bundal Island but later backtracked. However, he added, progress on the issue has been made.

Senator Faraz claimed that the government would ensure protection of marine life, mangroves and fisheries. “A documentary will also be made to highlight the efforts in this regard,” he said.

In separate decisions, the federal cabinet allowed framing of a law to punish rapists, including their castration, to curb rising incidents of rape.

The prime minister also directed the authorities concerned to ensure uninterrupted gas supply to domestic consumers and industries during the current winter. Besides, he ordered that a committee be constituted for “effective use” of the properties of Azad Jammu and Kashmir (AJK) government in Pakistan.