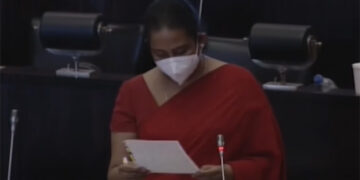 Colombo, May 5 (Ada Derana) – More than 63 percent of the Sri Lankan population can be comprehensively vaccinated before the end of this year, Minister of Health Pavithra Wanniarachchi told the Parliament today (May 04).

This remark came as a response to an accusation levelled by Opposition Leader Sajith Premadasa, who took aim at the government’s handling of the pandemic situation. He claimed that the government has failed to secure sufficient coronavirus vaccines.

“In the first round, 924,987 people were given the vaccine, and in the second round 356,130 people are expected to be vaccinated. However, the government is short of 568,000 vaccine doses,” the Opposition Leader pointed out.

He also criticized the government for procuring the China-made Sinopharm vaccine and Russia-made Sputnik V vaccine which he said were not approved by the World Health Organization (WHO).

The health minister, in response, stated that according to the WHO’s guidelines, if the Sputnik V vaccine has been approved by two of Russia’s stringent authorities and Sri Lanka’s National Medicines Regulatory Authority (NMRA), the vaccine can be used.

It is on these grounds that the NMRA approved the Sputnik V coronavirus vaccine for emergency use in Sri Lanka, she explained.

Speaking further, the health minister noted that the NMRA had studied and approved the Oxford-AstraZeneca coronavirus vaccine for local use even before the WHO did.

“Before the end of this year, we will have enough vaccines to comprehensively vaccinate more than 63 percent of our country’s total population.”