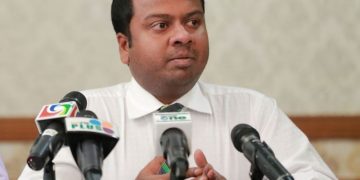 Colombo, March 20 (newsin.asia): The Maldivian Ambassador in Sri Lanka, Mohamed Hussain Shareef, has said that no foreign country or agency is suspected to be involved in the plot to overthrow the Abdulla Yameen government by bribing two Supreme Court judges to pass suitable orders.

Shareef told the Foreign Correspondents’ Association of Sri Lanka here on Monday, that investigations thus far have not revealed involvement of foreign elements. Asked if the US is trying to bring about a regime change, the envoy said that the American Ambassador, Atul Keshap, has not told him about it!

The accusation is that a Maldivian company had handed over US$ 2.4 million to bribe the judiciary with luxury housing in Male.

Gasim Ibrahim, leader of the Jumhoory Party and a wealthy resort owner, who is in Germany as a fugitive from the law, admitted on a Maldivian TV channel recently that the opposition had got the Supreme Court to issue the order of February 1.

The government’s case is that the Supreme Court’s order of February 1 ( to immediately release nine top opposition leaders and remove the disqualification of 12 parliamentarians) was meant to cripple the constitutional power of the Executive, the law and constitution, and render the government non-functional. It is therefore described as an attempted judicial coup.

Emergency To Go On March 22

With sufficient progress having been made in investigations into the “coup plot” the government has decided to lift the 45-day State of Emergency on March 22 at 7 pm, Ambassador Shareef said.

On talks with the opposition to end the political standoff, which was the basis of the plot to overthrow the government, Shareef said that attempts to talk have been on since 2015. Government had invited the opposition to come for unconditional talks seven times. But the opposition’s preconditions had been unacceptable.

“Government would say come for talks unconditionally and mention your demands in the agenda. But the opposition would place impossible preconditions. In one case, they wanted a jailed leader to be presented at the talks. How could the government agree to that?” Shareef explained.

In the current case, the opposition wants the government to implement the controversial Supreme Court order of February 1 prior to talks. But government has said that the order cannot be implemented as it is unconstitutional, virtually nullifying the Executive arm of the State.

Meanwhile, international pressure is mounting on the Abdulla Yameen government to implement the court order of February 1.

Although the European Union’s Ambassador had visited the Maldives to see if the State of Emergency is inconveniencing the people, the EU’s resolution seeking to make Maldives a secular State had disappointed the government because “Maldives is an Islamic country, a character which cannot be changed,” Shareef explained.

He further said that the West’s contention that the political leaders in jail are “political prisoners” is not acceptable as they had been convicted for criminal offenses like terrorism, murder and bribery with intention to overthrow a lawfully elected government. “They are not political prisoners”.

The State of Emergency has not affected tourist arrivals. They have  gone  up by 19% . But the travel advisories are still valid, and this had led to cancellations which are worrying the government, the envoy said.

On Islamic radicalization and Islamic terrorism, Shareef said that these are being effectively monitored and controlled but are still cause for concern.

In all, from the beginning till now, 62 Maldivians had gone to Syria and Iraq to join Islamic militants. But it is not certain how many of them are alive or dead, Shareef said.

But their return to the Maldives is a worrying possibility, Shareef added. The government has set up a monitoring center with international assistance, including help from US and UK. Thailand, Malaysia, and Turkey have helped nab Maldivians who might have gone to join the ISIS.

According to Shareef, most of the recruits to Islamic militancy are kids with access to pernicious material on Facebook. But the more worrying part is that their parents are also involved in motivating them.

“They believe that if a Muslim dies in Jehad, he will go straight to heaven,” Shareef said.

“To arrest this kind of dangerous indoctrination, the government has passed a law which prohibits people from preaching Islam unless they are certified by the government. What the certified  preacher preach  is a moderate or true Islam,” the envoy said.

As for terrorist attacks, there has been none in recent times. But there was a plan to attack the airport in Male.

“A friendly country had alerted us about it and we made some arrests,” Shareef said.

Of course, there had been an attempt on the life of President Yameen when there was a blast in his boat. But that was the handiwork of a political opponent. The last terrorist bomb blast occurred way back in 2012 in a Male park when Yameen was not President.

On the alleged lurch towards China, and the “debt trap” the Maldives is getting into by borrowing from China massively and at a high rate of interest, Shareef said that allegations are baseless.

“The total Chinese investment in development projects in the Maldives is about US$ 1.5 billion. Some are export credits, some are grants and some are concessional credit. But the Maldives is nowhere near a debt trap. The IMF,  Moody’s and Fitch have all rated the country as credit worthy. And the Maldives has never defaulted on repayments,” he said.

The US$ 200 million that had to be given to the Indian company GMR on cancellation of its airport building project, “was  paid in full within a week of the Arbitrator’s order,” Shareef recalled.

China’s economic involvement in the Maldives goes back to the Presidency of Maumoon Abdul Gayoom, the envoy said. Nasheed had also approached China for investment when he was President. At   present, Chinese companies are building a runway at the Male airport, a bridge linking Male with Hulumale and a massive housing project in Hulumale, the envoy said.

Calling Nasheed a “demagogue”, Shareef said that he makes allegations without  checking facts.

“He said that China has grabbed 17 islands. But ask him to name one island, he won’t be able to. His allegations depend on which country he is giving his interview in.”

On the Maldives growing dependence on China for security, the Ambassador said that the Maldives depends for its security entirely and exclusively on the Tripartite Agreement between the Maldives, Sri Lanka and India.

“ Dependence is only on this Agreement and nothing else. And that will remain so,” the envoy said.

Shareef spoke on the ambitious “I Haven” project in the Northern part of the Maldivian archipelago, which will be taken up in President Yameen’s second  term beginning next  year.

The billion dollar project funded by Saudi Arabia and private investors from across the globe, will be a commercial one and will include a container port, business centers, housing  and entertainment facilities.

“ Indian companies should invest in it as the container port will be the nearest to the Lakshadweep and the States of South India,” the Ambassador said.

Asked if the Presidential election will be held as promised in September this year, Shareef said that the Election Commission has already said that nominations will be accepted  from July onwards. The election will be watched by international observers.

As if Nasheed and others in jail will be allowed to contest, the envoy said that Nasheed cannot because he had been sentenced in 2015 to 13 years in jail for terrorism. However, if he had served 25 % of the term, he could apply to the President for remission of sentence. But the question is will he?  As for  Jumhoory Party leader, Gasim Ibrahim, he is over-age, as there is cap of 65 years to contest for President, Shareef pointed out.

“However, there are other leaders in Nasheed’s MDP (Maldivian Democratic Party) who are good enough to contest, but Nasheed would not allow them to do so,” the envoy said.

On why the ruling Progressive Party of Maldives (PPM) lost the local body elections to the MDP, Shareef said that at the time of the elections, the PPM was in disarray. Former President Maumoon Gayoom had quit with the party with his followers and the party left with Yameen did not even have the members’ list to conduct a systematic campaign.

(The featured image at the top shows the Maldivian Ambassador in Sri Lanka, Mohamed Hussain Shareef)