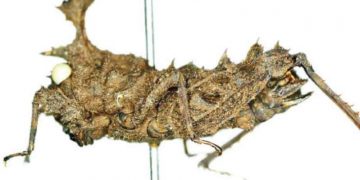 August 6 (Daily News) – A new species of pygmy grasshopper, discovered after 116 years by a group of foreign researchers in Sri Lanka, has been named after a 28-year-old Indian orthopterist (one who studies grasshoppers) and conservation biologist Dhaneesh Bhaskar of Kerala.

The new species, which was discovered by a group of Croatian and German researchers in Sinharaja Rainforest of Sri Lanka, hails from the Cladonotus genus and has been named as the Cladonotus Bhaskari.

The discovery is based on a single specimen of the species photographed in 2016 by Tom Kirschey in its natural rainforest habitat in Sri Lanka. The researchers then studied it and found it to be distinct from all the other discovered species of grasshoppers and declared it a new species in research journal Zootaxa in July, this year.

Bhaskar, who is a grasshopper researcher in Kerala Forest Research Institute and a member of the Species Survival Commission (grasshopper specialist group) of the International Union for Conservation of Nature (IUCN), expressed his happiness after finding out about the development.

Bhaskar said, “I am deeply honoured with the move of the researchers. It will surely motivate me in pursuing my research on grasshoppers and contribute in a more significant manner in the Indian Orthoptera research.”

One of the researchers from the group, Josip Skejo from Faculty of Science, Department of Biology at the University of Zagreb, Croatia, said, “We decided to name the new species of pygmy grasshopper after our good friend Bhaskar to honour him on his research he had done on the grasshoppers in India.”

The other researchers of the group include Josef Tumbrinck, Maks Deranja, Karmela Adzic, and Marko Pavlovic. Lauding Bhaskar’s research, Skejo also said, “Bhaskar made it possible for all the people around the world to get familiar with the grasshopper species of India after he initiated a project on digitalisation of all the specimens discovered here.”

“I think naming a new species after him will give him huge motivation in his research of grasshoppers in India,” he added.

On the significance of the discovery of the new species, he said, “It is very important because our study suggests it is the first specimen in last 70 years, and the first new Cladonotus species in the last 116 years.”

On the new species, Skejo said, “The Cladonotus Bhaskari is the largest known specimen of genus Cladonotus, and it is the only known female.”

“Its body is robust and dark in colour. The living specimen in dark brown in colour, while pale brown when the specimen is dried. It’s whole body, head and legs are covered in fine and minute spine-like tubercles. It resembles tiny twigs hence it is also called ‘Twighopper’,” he said. “It is also clearly distinguished from other species of the genus by its long and spine-like frontomedial projection and cockscomb shaped promedial projection,” he added.