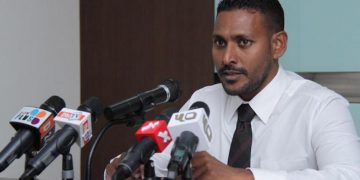 Hussain Shameem: To put it briefly, Maldivians do no trust President Abdulla Yameen’s administration. They’ve hijacked the whole state. The people do not trust institutions to uphold democratic principles and system of checks and balances. There is no public confidence in the judiciary and the elections commission, because of the actions of the people representing these institutions.

For example, all political parties have rejected the election commission’s plans to introduce electronic voting, all stakeholders, including international actors have spoken out against it, but the commission is determined to go ahead. The election commission members were previously members of the People’s Alliance [now-defunct party founded by Yameen] and the PPM. The lack of trust is, therefore, inevitable.

We need a transitional period to ensure a free and fair election. That is not possible without correcting what has gone wrong. Restoring public confidence is vital.

XS: What does your portfolio entail?

HS: My mandate as the shadow minister for constitutional reform is three-pronged.

But recent legal changes brought to the mandate of local councils and city councils [granting the president the authority to determine local council mandates] is against the decentralisation system envisaged by the constitution. Another example is the law criminalising defamation, another clear breach of democratic principles. A third example is the amendments brought to the Civil Service Act where ministers were given authority to appoint permanent secretaries [top civil servant], which undermines the independence of the civil service.

These laws must either be repealed, overturned or amended.

HS: By no means will it be easy. It would require detailed notes, and input from a lot of people.

That is our task at MUO, and this is why a transitional stage is necessary. It is basically about levelling the playing field before the start of a match. Certain democratic processes, such as a reliable judicial system and respect for fundamental rights, must be in place for a free and fair election. We need to fix the mess created by the Yameen administration. If an election is heldtomorrow, it can easily be manipulated.

XS: You said your portfolio is three-pronged. What is the second prong?

HS: Putting in place the democratic processes required for a free and fair election. This means, for example, overhauling the current elections commission. We cannot have a free and fair election with government supporters sitting on the commission. Restoring public confidence in these institutions, both the election and the human rights commission, is key. We could go for an interim arrangement like in 2008 when the electoral body was selected from nominees put forth by political parties.

XS: And the third?

HS: The third is structural changes to the constitution, based on the issues we have identified in the past eight years. For instance, the constitution allows a simple parliamentary majority to restrict basic freedoms, or appoint and remove members from independent commissions. When a member of a commission fears for their jobs, it affects their independence.

Another matter of concern is judicial reform. Article 285 attempted to address the issue [the provision tasks a watchdog to vet and appoint judges for life]. But after eight years, we realise that judicial reform requires a dedicated chapter, not one provision.

These are just a few examples. We have a lot of ideas and will have wider consultations with the public and other stakeholders to bring about comprehensive constitutional reform.

XS: Why do you say that Article 285 is not enough?

HS: We all failed to uphold the purpose of judicial reforms as outlined in Article 285 and other provisions of the constitution. Everyone knows, it is evident what the article meant. Everyone knew it. It wasn’t a matter of ignorance. It was that some raised self-interest above everything else. That’s what I mean, we did not envision those issues back in 2008. We all believed that everyone would uphold the constitution.

We shall set out a detailed framework for judicial reform, one that will be discussed with all stakeholders and implemented swiftly, even while ensuring a smooth transition to a new, more transparent and accountable judiciary.

XS: So say the government is changed legally, what happens tomorrow?

XS: What about the MUO itself? It comprises of so many individuals of so many affiliations and of so many ideologies. Is there a fear that some may sabotage the process?

HS: No, the MUO is an interim arrangement. The impression I have is that we are all working in our common interests and that of the general public. Politically, we all benefit from the transitional stage as it will ensure that everyone in the MUO, and even those outside of it, gets to participate in a free and fair election. Such a scenario is impossible under the current circumstances. MUO adheres to democratic principles and its partners have a common interest – a free and fair election for everyone.

XS: Could the MUO become a political party?

HS: I suppose that cannot be ruled out, it might well be a possibility. A common candidate is more likely, and it has been discussed. But that’s as far as it’s gotten.

XS: What will be the biggest challenge during the transitional stage?

HS: Judicial reform. The existing judiciary, its key players, will resist change. Because we are talking of removing some and their perks. I am lobbying the MUO to set benefits and privileges for the jobs, not the individuals. A certain judge must not get a luxury flat, the flat will be held for those who occupy the position at the time. When their tenure is up, the flat is transferred to the next person to hold the portfolio.

I think our biggest challenge and our biggest success would be judicial reform. There are historic reasons for judicial corruption. To address this, we have programs planned and we are confident that we are moving in the right direction.

XS: What about the parliament? How can MUO push through all those reforms with a parliament whose majority is currently loyal to Yameen?

HS: The transition will come with political dialogue, which means the current status quo changes, somewhat. With this dialogue, we will be able to push our agenda. We will work within legal and parliamentary processes, that is the basis of the MUO.