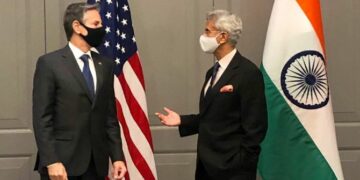 Jaishankar to ask Blinken to send vaccines to India during visit

Jaishankar to ask Blinken to send vaccines to India during visit Washington, May 25 (SAM). The Indian External Affairs Minister S. Jaishankar and his American counterpart Antony Blinken will discuss COVID-19 relief, multilateralism and the Quad during the Minister’s visit to Washington this week, according to the U.S. State Department.

Mr. Jaishankar is on a visit to New York and Washington DC, from May 24 to 27.

“The Secretary [Mr. Blinken] looks forward to meeting Minister Jaishankar during his visit and to discussing a broad range of issues, including COVID-19 relief, efforts to strengthen Indo-Pacific cooperation through the Quad, enhanced U.N. and multilateral cooperation, and a range of other shared regional security and economic priorities,” a statement from a State Department spokesperson said on Monday, according to The Hindu.

The Hindu further said that Mr. Jaishankar will also meet U.N. Secretary-General Antonio Guterres (in New York) as well as vaccine manufacturers Pfizer, Moderna and Johnson and Johnson to discuss procurement, The Hindu had reported last week. The Minister is also expected to discuss the AstraZeneca vaccine with the Biden administration; the U.S. government is sending 60 million doses of this vaccine abroad — and some of it is likely to be given to India which faces shortage.

It is understood that Mr. Jaishankar and Mr. Blinken are likely to meet on Friday, given Mr. Blinken is travelling to West Asia and Egypt on Monday through Thursday.