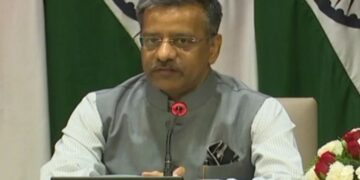 Colombo, February 18 (newsin.asia): An online one-day workshop on ‘Intelligence and National Security’ for Sri Lankan police and intelligence officials was conducted on February 16 by the Bureau of Police Research & Development (BPR&D), Government of India.

Five of the scheduled 10 modules have been completed with the participation of over 125 Lankan police officers, an Indian High Commission press release said.

Speaking in the valedictory program, Indian High Commissioner Gopal Baglay said that such training programs are mutually beneficial to both the countries and quite useful in capacity building of Sri Lankan police officers. The High Commissioner emphasized the significance of addressing shared security challenges collectively by India and Sri Lanka, and in this context, called for promoting security cooperation between the two countries.

The High Commissioner commended the existing mechanism for sharing information and experience and specifically mentioned that in recent months Indian security agencies on the request of Sri Lankan counterparts, apprehended Sri Lankan fugitives who had fled to India.

On this occasion, V S K Kaumudi, Special Secretary, Ministry of Home Affairs, Government of India stated that Sri Lankan agencies may use provisions of Mutual Legal Assistance Treaty while seeking assistance from India in investigation matters. From Sri Lanka, DIG, Special Branch, T C A Dhanapala appreciated the deliberations of the workshop and thanked Government of India for organizing this workshop.

Prabhakar Alok from India shared their experiences with over 25 senior police officers including DIGs and SSPs of Sri Lanka. It may be mentioned that under the current online training program so far, 5 of the scheduled 10 modules have been successfully completed with the participation of over 125 Sri Lankan police officers.