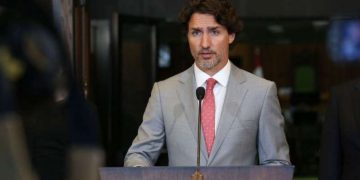 "Canada will always be there to defend the right of peaceful protest," Mr Trudeau said on Monday. Mr Trudeau and Conservative opposition leader Erin O’Toole both made comments this week expressing concern over India’s response to the demonstrations.

“Canada will always be there to defend the right of peaceful protest,” Mr Trudeau said on Monday.

Thousands of farmers have travelled to Delhi to protest agricultural reforms.

Protesters were met last week with barricades at Delhi’s border and clashes erupted between farmers and police.

Photos and video of the encounters show scenes of authorities deploying tear gas and water cannons to stop the farmers from entering the city.

Farmers are now being escorted by police to a protest site where they are expected to continue demonstrating against the reforms, which will open the farming sector to private players.

Two farmers associations have said they expect 50,000 farmers to reach the Delhi border from the neighbouring state of Haryana.

Speaking on Monday to celebrate the birth of Guru Nanak Dev Ji, the founder of Sikhism, Mr Trudeau mentioned the protests and called it a “concerning” situation.

“We’re all very worried about family and friends,” he said during the virtual celebration. “We believe in the importance of dialogue and that’s why we’ve reached out through multiple means directly to the Indian authorities to highlight our concerns.”

“Such comments are unwarranted, especially when pertaining to the internal affairs of a democratic country,” said Anurag Srivastava. “It is also best that diplomatic conversations are not misrepresented for political purposes.”

Mr Trudeau’s office did not immediately return a request for comment.