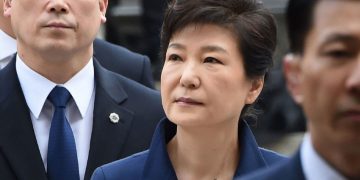 by Editor
in Around The World, Headlines
Reading Time: 3 mins read
5 0 Seoul, April 6 (The Guardian) – South Korea’s former president, Park Geun-hye, has been sentenced to 24 years in prison for abuse of power and corruption, in a scandal that exposed webs of double-dealing between political leaders and the country’s conglomerates, and the power of a Rasputin-like figure at the top of government.

The 66-year-old was not present for the ruling on Friday, citing sickness, and has boycotted the proceedings since October. Park has one week to appeal the litany of charges against her that range from corruption to maintaining a blacklist of artists.

Prosecutors had sought a 30-year jail sentence and an £80m fine on charges that also included bribery and coercion. In a rare move, the court in Seoul decided to broadcast her trial live, a move Park objected to.

The court found that Park, had colluded with her long-time friend Choi Soon-sil to solicit bribes from South Korean conglomerates including Samsung and retail giant Lotte in exchange for policy favours. Prosecutors charged Park with 18 separate crimes and accused her of working with Choi in taking bribes of at least £25m and pressuring companies to fund nonprofits run by Choi’s family. She was also accused of leaking classified information.

Choi, a pastor’s daughter, had no government experience but was described in a US diplomatic cable as having “complete control over Park’s body and soul during her formative years”. Choi’s influence over the president led one opposition lawmaker to describe Park’s government as “a scary theocracy”.

The scandal exposed what has long been widely suspected in South Korea: the entangled web of government and sprawling business conglomerates that dominate the country’s economy. Park’s rise to the presidency in 2013 was seen as a personal redemption 30 years after her father, then the country’s dictator, was assassinated. But while personally damaging to South Korea’s first female leader, the corruption scandal has also resulted in a major blow to conservatives in the following election.

Choi was jailed for 20 years in February for using her influence to gain favour and enrich herself, and the heads of Samsung and Lotte were both given shorter prison sentences.

Park denied all the charges against her, although she did apologise for allowing Choi to influence her, the closest she has come to an admission. Park has been held at a detention centre near Seoul since her arrest in March 2017.

Park was South Korea’s first democratically elected leader to be removed from office outside the electoral process, her downfall last year coming after weeks of street protests known as the Candlelight Revolution, a parliamentary impeachment and finally an order from the country’s constitutional court.

Despite the scandal, Park still commands a loyal following in South Korea especially among the elderly. They supported her hawkish line on North Korea and fondly remember her father who ruled for 18 years from 1961, and lifted the country out of postwar poverty.

Over 1,000 supporters gathered outside the court in a boisterous but orderly rally on Friday, singing the national anthem, waving Korean and American flags and chanting slogans calling for Park to be freed. Protesters began screaming loudly when news of the sentence was released, with some marching in the street and blocking traffic.

“She should be released today, but instead she effectively gets a death sentence,” said Alex Fisherman, a Korean adoptee raised in Chicago who traveled to Seoul for the protest. “Because of her age she’ll likely die in prison, it’s a very sad story.”

Others were dismayed over the recent rapprochement with North Korea under Park’s successor, President Moon Jae-in, and advocate more hardline policies toward their neighbour.

“We’re here to defend our country against North Korea,” said Kim Hyong-jun, holding a banner with a photo of Park. “We need to fight against Kim Jong-un and Moon Jae-in since their actions threaten democracy and the safety of the Korean peninsula.”

Park’s predecessor, Lee Myung-bak, is also facing corruption charges and is accused of a host of crimes ranging from bribery to abuse of power to embezzlement and tax evasion. Two previous leaders were convicted of treason, mutiny and corruption in 1996, with one receiving a death sentence, but both were later pardoned.