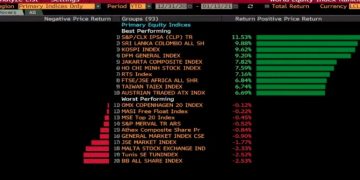 Colombo, January 15 (Daily Mirror) – According to Bloomberg data, the Colombo Stock Exchange’s (CSE) benchmark All Share Price Index (ASPI) is the second best performing stock index in the world as of Wednesday with a rate of return of 9.88 percent.

Chile’s S&P CLX IPSA Index has been ranked as the top performing stock index of the world while the third places goes to KOSPI Index of Korean Stock Exchange.

The daily average turnover of CSE topped Rs.7.4 billion for the eight trading days of 2021.

Meanwhile, the CSE in a media release this evening  said it has taken measures to increase regulatory supervision given the increased level of market activity.

“Given the increased level of market activity the CSE has taken measures to heighten the level of regulatory supervision, market surveillance and monitoring of risk.

The CSE has been proactively taking such measures in the past and will continue to do so,” the statement said.

It also noted that the regulatory framework of the stock market has been strengthened on several aspects in recent times including the supervision of stock broker firms, monitoring of market risk and credit risk and market surveillance and enforcement mechanisms for listed companies.

“As the operator of the stock market, the CSE remains strongly focused on maintaining the confidence of investors by preserving the market’s integrity and quality and being fully aware that it is only by operating a fair, orderly and transparent market that it will be possible to sustain this level of investor confidence and performance,” the statement concluded.

This media release appears to have been prompted by the claims of certain Opposition lawmakers that the CSE is again going to witness a ‘pump-and-dump’ scenario, similar to what happened in 2012-13.