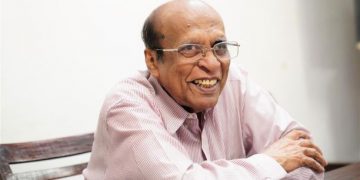 Colombo, September 13 (Xinhua):  China’s Belt and Road Initiative (BRI), of which Sri Lanka is an early participant, is beneficial to developing countries and creates multi-polarity in world affairs.

Former General Secretary of the Communist Party of Sri Lanka (CPSL) D.E.W. Gunasekera told Xinhua that the China-Sri Lanka ties have reached a new high due to the implementation of the BRI and massive Chinese investment in infrastructure and energy projects in the island country.

BRI, a reference to the Silk Road Economic Belt and the 21st Century Maritime Silk Road, is aimed at building a trade, investment and infrastructure network that connects Asia with Europe and Africa along the ancient trade routes.

Gunasekera, who served as the general secretary of the CPSL for 16 years until his resignation in August, said China’s development has enabled a multipolar world with new economic centers emerging in Africa, Latin America and Eurasia.

“A new continent called Eurasia is emerging due to the Belt and Road Initiative,” Gunasekera said. “The Asian economy is the vanguard of the world economy.”

Cooperation with China is imperative for developing countries like Sri Lanka so as to safeguard national interests and make use of China’s massive market, Gunasekera said.

He said that the CPSL played a significant role in convincing the then government of Sri Lanka to sign the Rubber-Rice Pact with China in 1952, and establish the formal diplomatic ties with China in 1957.

Commenting on China’s development, Gunasekera recalled that he was part of a CPSL delegation to visit Shenzhen in 1980s, when only basic infrastructure had been built in the fishing village in south China, which has now been transformed into a global technology hub.