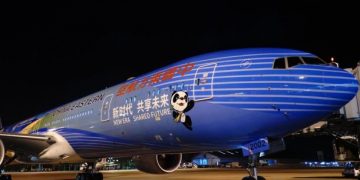 The third CIIE, which the flight was promoting, is slated to be held from November 5 to 10  in Shanghai. Colombo, September 20: An unusual flight arrived at the Colombo airport in Sri Lanka on September 18. As the sun went down and the lights were switched on, a dazzling China Eastern Airlines Boeing 777-300ER gaily painted in blue and prominently displaying the insignia of the China International Import Expo Bureau (CIIE) touched down at the Bandaranaike International airport.

The flight’s mission was to promote the CIIE and also highlight China-Sri Lanka trade, economic cooperation and friendship, says a Xinhua report by Tang Lu

The third CIIE, which the flight was promoting, is slated to be held from November 5 to 10  in Shanghai. China Eastern Airlines is the designated air carrier for the event.

The CIIE’s slogan “New Era, Sharing the Future” and the mascot “Jinbao” painted on the aircraft were eye catching. As the protagonist of the expo, the cute panda “Jinbao” was shown holding the four-leaf clover, in an expression of blessing. The four leaf clover is also the logo of the CIIE.

Colombo was reportedly the last port of call for the Jinbao’s global cruise. Significantly, it was the only stop in South and South East Asia, which clearly indicated the existence of a special relationship between China and Sri Lanka.

Subasinghe said that the CIIE in Shanghai would enable China to open its market and promote trade. The expo will also be a platform for other countries to showcase their development achievements and discuss global economic and trade issues. The Sri Lanka Export Development Agency (SLEDA) will arrange for local enterprises to actively participate in the CIIE, Subasinghe assured.

The discussion between Subasinghe and Yang Zuoyuan, were also on the importance of further strengthening of trade between the two countries fully utilizing the vast potential that lay untapped.

The importance of Chinese investments in Sri Lanka, taking advantage of the regulatory framework of both the countries, was discussed for a greater utilization of existing FTA concessions.

Sri Lankan exporters and producers from the apparel, spices, fresh fruits, and other food & agriculture product sectors are expecting to explore the lucrative Chinese market. Nearly 400 Mn people in China are considered middle-class income earners. This figure is expected to grow by 70% in 2030.

According to the IMF, China’s economic growth after the pandemic is predicted to be 8.2% which will give vast opportunities for its trading partners.

(The picture at the top shows the painted China Eastern Airlines special flight to promote the Shanghai international expo in November this year. Photo: Tang Lu)