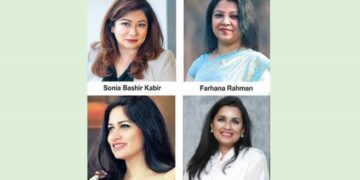 Dhaka, March 17 (Daily Sun): Women in Bangladesh have shown excellence in technology businesses apart from leading local and international venture in last ten years with policy supports from the government.

On the eve of International Women’s Day, Daily Sun tried to review the contribution of women in leadership role at different segments of technology from entrepreneurship to executive role.

“The possibilities are endless when it comes to using technology to address social problems. I believe, the more women get access to technology and become digitally savvy, the less discrimination and inequality there will be,” Rubaba Dowla told the Daily Sun on Saturday.

She said the theme of “chose the challenge” as vital role to build an environment that embodies values of inclusion, equity and diversity through unconscious bias.

“Mitigating bias will enable all of us to nurture a culture of respect and belonging across any workplace. At Oracle, we believe that innovation starts with inclusion and we are always committed to creating a workplace for people with diverse backgrounds, perspectives, and abilities,” Rubaba said.

From startup segment, Shohoz has achieved a growth from a ticketing platform to a super app model under leadership of its visionary founder CEO Maliha Quadir.

According to Maliha, although the participation of women in top executive levels is very little in global and local tech firms, the young entrepreneurs have begun to change the landscape.

“I have seen things changing for the better over the last 5 years. Slowly, more women are coming to tech and to startups. At Shohoz, we have a good number of very talented women,” Maliha Quadir said.

Basis senior vice president Farhana A Rahman said the lack of awareness on tech education for girls is “a major hindrance for lower participation of women in technology.” “From government, from private sector, we have been trying to promote girls in technology. However, the inspiration from family is important to make a women programmers or entrepreneur successful.”

In startup segment, there are many young girls come forward with excellence in top levels. Of which, Maya App founder CEO Ivy Huq Russell, ShopUp co-founder Siffat Sarwar, JustStorys CEO Breity Sabrin tried to do something new with technology.

She is going to look after Bangladesh matters which became an inspiration for many young girls in the country to involve in global platform.