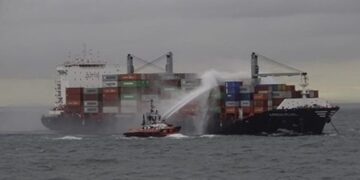 May 27 (Splash247) – The burning ship at the centre of an environmental catastrophe off Sri Lanka was denied access at two ports, Splash can exclusively revealed.

Fire has ravaged the entire length of the three-month-old, 2,700 teu X-Press Pearl with its owner now accepting a constructive total loss is inevitable.

The ship, which caught fire while at anchorage off Colombo last Thursday, suffered an explosion yesterday, necessitating the swift evacuation of the crew. General Average has been declared on the X-Press Feeders ship, which was carrying around 25 tons of acid among the 1,486 containers onboard.

It was a case of not in my backyard syndrome

Debris from the burning containership has washed ashore and locals have been warned not to touch any of it as it could be contaminated with harmful chemicals.

The full story of how the ship came to meet its likely fiery end in Sri Lanka has overtones of previous ship catastrophes such as the 2002 Prestige tanker incident and will likely fan the flames in the ongoing places of refuge debate.

Speaking with Splash today from Singapore, Tim Hartnoll, the executive chairman of X-Press Feeders, said that poor packaging was responsible for the acid leak, which the crew had detected while in the Arabian Sea thousands of kilometres away from Sri Lanka. On detecting the leak, the ship’s captain then contacted two ports – Hazira on the west coast of India and Hamad in Qatar – requesting to offload the containers in question. The requests were denied and the ship, which was delivered from a yard in China this February, made its way to Sri Lanka.

“It was a case of not in my backyard syndrome,” Hartnoll said.

While salvage teams – assisted by Sri Lankan and Indian military forces – fight to minimise damage, acid and fuel is thought to have spilled into the sea, and the ship’s owner is anticipating the London P&I Club-insured vessel will be declared a total loss.

“The biggest threat to container shipping is fire onboard on ships,” Hartnoll said.

A separate source at the company commented: “This disaster could have been prevented had those ports done their duty and taken in the cargo rather than endangering the crew and the ship.”

Gard’s report outlined three main reasons for the fires seen historically. Ranked first is self-heating charcoal. Ranked second is chemicals incorrectly packaged and/or declared with batteries listed as the third biggest cause of fires in containers at sea.