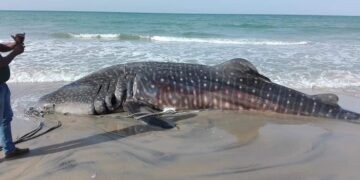 Colombo, June 30 (NewsWire) – Nearly 200 marine animals have died due to the environmental pollution caused by the MV X-Press Pearl vessel which caught fire off the coast of Colombo in May.

The Attorney General’s (AG) Department today briefed the Colombo Magistrate’s Court on the impact caused to marine life as a result of the ship disaster.

The Department said 176 turtles, 20 dolphins, and four whales have died so far due to the environmental impact caused due to the fire onboard the X-Press Pearl and related incidents.

The vessel which was transporting hazardous chemicals caught fire off the coast of Colombo, resulting in a number of its cargo toppling into the sea.

Following this, the carcasses of a number of marine life, including turtles, dolphins, and whales were found washed ashore as a result of the environmental pollution caused by the vessel.