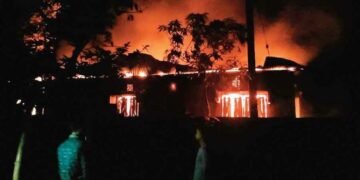 Kolkata, May 4 (The Telegraph): BJP national president J.P Nadda, in Calcutta for a two-day visit, visited homes of alleged victims of Trinamul atrocities on Tuesday, as his party continues to mount political pressure on Mamata Banerjee ahead of her swearing-in as chief minister for a third term on Wednesday.

“After the results, Trinamul goons went to the house of Haran Adhikari vandalised it, threatened women and children, attacked them and broke his wife’s teeth,” Nadda told news channels at Sonarpur in South 24-Parganas. “They then dragged Adhikari out of his house and beat him up. He died.”

He was also scheduled to visit the home of another BJP worker, Abhijit Sarkar in Beliaghata, who was allegedly killed by Trinamul supporters.

Nadda’s visits to homes of victims of political violence was reminiscent of the Trinamul’s days in the Opposition when its general secretary Partha Chatterjee moved from one trouble spot to another when the Left Front was in power.

Earlier, upon landing at Netaji Subhash Chandra Bose Airport here, Nadda told the media, “We are committed to democratically fight this ideological battle and the activities of the TMC, which is full of intolerance. I had heard of the immense atrocities committed during the Partition, but I have never seen such post-poll violence that is occurring in West Bengal after the declaration of election results (on May 2).”

Since the election results were announced on the evening of May 2, Bengal has been in the grip of a vicious cycle of violence in several parts of the state, involving the ruling Trinamul and the main Opposition BJP.

Some of the allegations made by the BJP have, however, turned out to untrue, indicating a motive to corner the newly elected government by citing violence to demand the imposition of the President’s rule in the state. Some voices within the BJP are already trying to amplify such a demand.

Such over-zealousness over the Bengal polls and its aftermath cost film actor Kangana Ranaut her Twitter account, which was suspended on Tuesday following her call to Prime Minister Narendra Modi.

“This is horrible. We need super gundai to kill gundai… she is like an unleashed monster, to tame her Modi ji please show your virat roop from early 2000s,” tweeted Kangana. Earlier, the actor had compared Mamata with Ravan, the mythological demon king.

Prime Minister Narendra Modi, who has reportedly not called Mamata yet to congratulate on her electoral victory, spoke with Governor Jagdeep Dhankhar on Tuesday.

“PM called and expressed his serious anguish and concern at alarmingly worrisome law and order situation” the governor tweeted. “I share grave concerns given that violence, vandalism, arson, loot and killings continue unabated. Concerned must act in overdrive to restore order.”

Mamata, who will take oath as chief minister on Wednesday, blamed the BJP for the escalation of tension in the state.

“This is BJP’s propaganda. Some sporadic incidents are there, but it happens in every state. I am not justifying violence. BJP is trying to create communal clashes, because of their shameful defeat,” Mamata told NDTV on Tuesday afternoon. “They have lost their credibility. Till now even law and order was being handled by the central forces, not by me. So, this is their doing, they are to blame for spoiling the situation if this is true.”

“The BJP is a communal party, they are trouble-mongers, they use fake videos, they misuse their powers, they misuse agencies; they want to demolish federalism, bulldoze the federal character of the country… They are not allowing universal vaccination. They are not giving oxygen. They need political oxygen” she told NDTV.

CPI(M) general secretary Sitaram Yechury had on Monday criticised the TMC over the violent clashes in the state since the announcement of the election results.

“Are these reports of gruesome violence in Bengal TMC’s victory celebrations’? Condemnable. Will be resisted & rebuffed. Instead of focusing on combating the pandemic, TMC unleashes such mayhem. CPI(M), as always, will be with the people to protect, assist, providing relief,” Yechury had said in a tweet.

The Congress also condemned the post-poll violence in Bengal by TMC cadres, saying such incidents were unacceptable and people of the state had not voted for lawlessness.

Congress’ Bengal in charge Jitin Prasada alleged on Tuesday that his party cadres were attacked by Trinamool Congress workers and even women and children were not spared. “The post-poll violence that has been unleashed by the TMC on the Congress workers is unacceptable. Even women and children are not spared. I’m sure the people of West Bengal did not vote for this lawlessness,” Prasad said on Twitter.