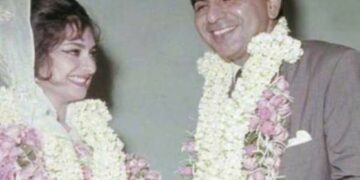 New Delhi, July 7:  Veteran actor Dilip Kumar passed away on July 7 after prolong illness. He is survived by his wife and actor Saira Banu. Apart from his inimitable style of acting, his whirlwind romance with Saira Banu is etched in public imagination. In the 2019 book Dilip Kumar: Peerless Icon Inspiring Generations, authors Trinetra and Anshula Bajpai write extensively about the auteur, dissect his legacy, and spotlight little known facts about the veteran.

In this excerpt from the book, published by Bloomsbury, there is a fascinating bit about the couple’s enduring romance, tracing it to iconic moment when they actually met.

In this excerpt from the book, published by Bloomsbury, there is a fascinating bit about the couple’s enduring romance, tracing to the point they actually met.

Saira Banu was given the title of ‘Beauty Queen’ at the time of release of her first film Junglee and, quite deservingly, it stayed with her forever. Dilip Kumar greatly admired Naseemji for her dignity and self-reliance. Being close to the doyen S Mukerji, Dilip Saheb was also close to the family of Naseemji.

Reportedly, Saira Banu had a crush on Dilip Kumar from her growing up years when she met the thespian on the sets of Mughal-E-Azam. While in London, Saira watched Mehboob Khan’s Aan at the Scala Theatre and was mesmerised by Dilip Saheb’s performance and personality. After completing her studies in England and upon her return to India, she engaged a scholarly Maulvi to make her proficient in Urdu and Farsi ostensibly to get closer to Dilip. There was some talk of Dilip Saheb accepting to cast Saira Banu as early as when Gunga Jumna was launched and later in Leader and thereafter for the second lead role of Shanta in Ram Aur Shyam (it eventually went to Mumtaz).

Reportedly, Saira Banu had a crush on Dilip Kumar from her growing up years when she met the thespian on the sets of Mughal-E-Azam.(Source: Ms Kanika Multiscope Pvt. Limited)

At a party hosted by Mehboob Khan in those days, S Mukerji had hinted to Dilip Kumar that the young girl Saira was crazy to work with him. Dilip Kumar reportedly told some scribes at that time that Saira Banu was too young to be cast opposite him. He also jokingly pointed to his greying mop of hair to dissuade Saira from pursuing ideas of starring opposite him. But, as Saira Banu’s debut film Junglee became a stupendous hit, she became a much sought after actress. Sairaji was signed for films opposite virtually all the top heroes of that era including Dev Anand, Raj Kapoor, Shammi Kapoor, Rajendra Kumar, Sunil Dutt, Joy Mukerji, Manoj Kumar, etc., but a choosy Dilip Kumar eluded her.

Saira Banu got so busy that she missed a few important films like SU Sunny’s 272 Palki (1967). Mehboob Khan, however, got her to commit bulk dates for his ambitious ‘Habba Khatoon’ for which he had announced Dilip Kumar as the leading man way back in 1957 itself. But Dilip Saheb could not get himself to play Yousuf Shah Chak (husband of the poetess Habba Khatoon) which had negative shades. He differed with Mehboob Khan on some aspects of the script, and eventually withdrew from the film. Soon after, Mehboob Saheb passed away and the jinxed ‘Habba Khatoon‘ got shelved. But, Saira Banu kept sending frequent requests to Dilip Kumar via some popular producers for doing a film with her. On the other hand, Dilip Saheb kept sounding clapper boards at the mahurats of Saira Banu films. Dilip Kumar kept on working with heroines matching his age and maturity. Nevertheless, at that juncture Dilip Kumar did confide in S Mukerji that he wanted to cast Saira in a subject specially written for her in a film titled ‘Song of the Valley’, which was set in the backdrop of the picturesque Kashmir Valley. But, the movie never took-off.

Then, the unthinkable happened. Dilip Kumar was in Chennai shooting for Ram Aur Shyam when he received an invitation from Naseem Aapa to attend Saira’s birthday bash in Mumbai on 23 August, 1966. Dilip Saheb decided to specially fly down to attend the event which later turned out to be the one that changed the course of his life. To quote Dilip Saheb, ‘When I alighted from my car and entered the beautiful garden that leads to the house, I can still recall my eyes falling on Saira standing in the foyer of her new house looking breathtakingly beautiful in a brocade sari. I was taken aback, because she was no longer the young girl I had consciously avoided working with because I thought she would look too young to be my heroine. She had indeed grown to full womanhood and was in reality more beautiful than I thought she was. As Dilip Kumar shook hands with Saira Banu and congratulated her, time stood still and in that very propitious moment Dilip Kumar found his wife and Saira, her husband.

They looked into each other’s eyes and that was it. The celestial stars smiled on the star-pair and the moment froze. Later, ushered into the spacious drawing room of Saira’s house, Dilip Kumar met many of his friends such as Dev Anand, Rajendra Kumar, music directors Shankar and Jaikishen, Manoj Kumar, Fali Mistry, Subodh Mukerji, RK Nayyar, etc, and exchanged pleasantries.

But, Dilip Saheb’s mind went racing back to the year 1955 when filmmaker SS Vasan had introduced him to an astrologer in Coimbatore who had predicted that he would marry in his forties and the girl would be extremely beautiful but half his age. He also said the girl would be from his profession only. His predictions were coming true, he felt. If ever there was a whirlwind romance in Hindi film industry, it had to be Dilip and Saira’s. Back in Chennai, Dilip Saheb kept regularly phoning Sairaji while she was shooting at Mehboob Studios for Lekh Tandon directed Jhuk Gaya Asmaan. One fine evening, he flew down to Mumbai and took Saira Banu out for dinner at the Sea Lounge of the Taj Hotel, followed by a drive to the Cuff Parade seafront where the most eligible bachelor of his time proposed to the Beauty Queen. The acceptance came readily.