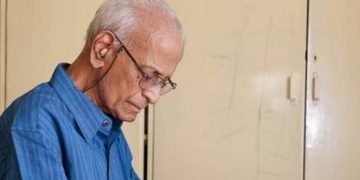 A recorded version of Bombay Jayashree’s Gujarati devotional “Vaishnav Jana To”, dear to Mahatma Gandhi, marked his remembrance by close family members at his home in India P.V.Krishnamoorthy (1921-2019), who had joined All India Radio in 1944 and had risen to become the first Director-General of Doordarshan (State Television broadcaster), had composed tunes for songs in Bengali, Malayalam and Hindi. Being among the pioneers in the movement to modernize traditional Indian music, PVK would have liked Bombay Jayashree’s rendition of Narsi Mehta’s 15 th.Century composition Vaishnav Jana To. (Picture: The Hindu)