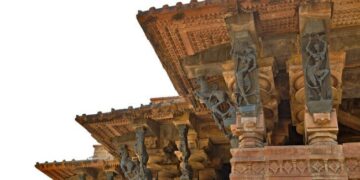 Construction of the sandstone temple began in 1213 CE on the orders of Recharla Rudra, a General in the army of Ganapati Deva, a King of the Kakatiya dynasty which ruled the Deccan at that time. The workers, architects and sculptors toiled for 40 years to erect the temple, according to the website of the Telangana government.

Located in the village of Palampet, about 200 km north-east of Hyderabad city, the temple is dedicated to Lord Ramalingeshwara Swamy. However, in popular parlance, it is known as the Ramappa temple as Ramappa was the chief sculptor or Stapati.

The temple is unique in important ways. Firstly, it is built with bricks that are so light that they can float on water.  Secondly, it is named after Ramappa, the chief sculptor, when generally temples are known by the name of the principal deity. According to the Telangana government’s website, this is probably the only temple in India to be known by the name of its sculptor.

The temple stands on a 6-feet high star-shaped platform with walls, pillars and ceilings adorned with intricate carvings which are the hallmarks of Kakatiya sculpture and architecture. The carvings of mythical animals, female dancers and a medley of other things are masterpieces of Kakatiya art. European merchants and travelers were mesmerized by the beauty of the temple. One of them described it as the “brightest star in the galaxy of medieval temples of the Deccan.”

While being beautiful, the structure has proved to be very sturdy too. The main structure is believed to have survived a major earthquake in the 17th century. M.A. Srinivasan, General Secretary, Public Research Institute for History, Archaeology & Heritage, Telangana, wrote in New Indian Express that the temple features decorated beams and pillars of carved granite and dolerite with a distinctive and pyramidal Vimana (horizontally stepped tower) made of lightweight porous bricks (the so-called ‘floating bricks’) which reduced the weight of the roof structures.

“The temple’s sculptures of high artistic quality illustrate regional dance customs and Kakatiyan culture. Located at the foothills of a forested area and amidst agricultural fields, close to the shores of the Ramappa Cheruvu, a Kakatiya-built water reservoir, the choice of setting for the edifice reflected the practice sanctioned in Dharmic texts according to which temples are to be constructed to form an integral part of a natural setting, like hills, forests, springs, streams, lakes, catchment areas, and agricultural lands,” Srinvasan says.

The temple consists of Garbhagriha, Antarala, Ardha Mandapa, Ranga Mandapa, Nandi Mandapa, Shasana Mandapa and subsidiary temples, all within the Prakara (compound wall). The temple is constructed on a 6.5 ft high Upapitha (platform) with a 10 ft wide Pradakshina Patha (pathway).

The three-storied Shikhara or Vimana of the temple is completely brick-built so as not to burden the structure below, Srinivasan says. The brick was the culmination of experimentation in brick-making starting from the time of the Satavahana dynasty, he informs.

On the composition of the light weight bricks he says: “These floating bricks, as they are popularly called, are made of clay mixed with the acacia wood, chaff, myrobalan and Ushira (Vatti Verlu), making the brick very light enabling it to float on water. Sand-box technology used to keep the foundations strong.”

Commenting on the bracket figures, Srinivasan says that show artistic creativity. “ They spring from outer pillars and touch the roof projections giving support. Alasa Kanyas, and lion motifs carved as bracket figures give physical support in an artistic way.”

Further: “The sculptural excellence of Ramappa is exhibited in every inch of the temple as displayed in the form of richly carved architraves, door jambs, lintels, elephant freezes, lion freezes, decorative motifs, Jaina figures, rishis, Siva, Narasimha, Ganesha and Bhairava.”

Black polished pillars in the Mandapa (hall) still retain the luster even after eight centuries of harsh interaction with nature and people, Srinivasan points out.

“The sculptures of voluptuous Nayikas, Nagini and Madanikas are poems in stone. Sculptures of women with high-heels, wearing cloth with lace embroidery, are strikingly modern. Sculptures in the Ranga Mandapa used for dance and other performing arts are appropriate.  Natya Ganapati, Dampati (couple in a sensuous pose), Rati-Manmadha, Gopika-Vastrapaharana, and Raasa- krida from the Bhagavata justify the proposition that temples or religious places were not just for the attainment of Moksha (liberation)  but also of Kama (earthy pleasures), Srinivasan says.