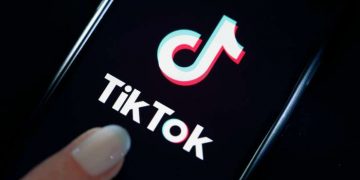 TikTok hits back as Trump threatens to ban app in US

TikTok hits back as Trump threatens to ban app in US August 2 (Sky News) – Chinese video-sharing app TikTok has responded to Donald Trump’s threat of a US ban by declaring: “We’re not planning on going anywhere.”

In a video aimed at the app’s supporters, TikTok spokesperson Vanessa Pappas said it was “here for the long run” and called people to “stand for TikTok”.

It followed a suggestion from the president that he would stop the app from operating in the US, as tensions have risen between America and China.

The US has repeatedly warned of a security threat from Beijing and accused it of billions of dollars’ worth of intellectual property theft.

China has denied the claims.

Ms Pappas said: “We’ve heard your outpouring of support and we want to say thank you. We’re not planning on going anywhere.”

TikTok later said in a statement: “These are the facts: 100 million Americans come to TikTok for entertainment and connection, especially during the pandemic.

“We’ve hired nearly 1,000 people to our US team this year alone, and are proud to be hiring another 10,000 employees into great paying jobs across the US.

“Our $1bn creator fund supports US creators who are building livelihoods from our platform.

“TikTok US user data is stored in the US, with strict controls on employee access. TikTok’s biggest investors come from the US.”

Mr Trump said he has the authority to ban the app from his country, and it could be done through executive action as early as this weekend.

“As far as TikTok is concerned, we’re banning them from the United States,” he told reporters on Air Force One.

The US president has signed an order forcing Chinese-based TikTok owner ByteDance to sell the US portion of its app due to national security concerns, according to The Washington Post.

The New York Times and others are reporting that the owner is in advanced talks with Microsoft to sell the US arm.