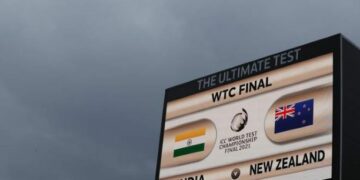 by Editor
in Around The World, Cricket, India, Uncategorized
Reading Time: 1 min read
11 1 Chennai, June 17 (The Hindu): We are looking ahead to the final of the ICC World Test Championship, billed as the World Cup of Test cricket. Over the last two years, nine teams have played several series against other opponents, accumulating points. The disruption caused by the COVID-19 pandemic meant that not all series could go ahead, forcing the ICC to come up with a modified points system that would allow the tournament to run its course and stage the planned final.

The top two teams, India and New Zealand, will play each other in a one-off Test match at Southampton starting on Friday. This is the first such championship final of its kind in Test cricket.

We discuss the evolution of the WTC, the fairness of the points system, possible changes in the format and the prospects of the two sides.

The podcast guest is Sharda Ugra, an independent sports journalist. Listen to it by clicking on the link below: