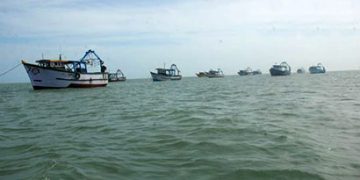 Colombo, Oct 18 (DailyMirrror) – Sri Lanka has raised its strongest objections with India’s External Affairs Minister S. Jaishankar and other Indian leaders, over the increase in trespassing of Indian fishermen in local waters in recent weeks and the use of bottom trawling which is destroying the sea bed in Sri Lankan waters.

Fisheries Minister, Douglas Devananda told Daily Mirror that he had in recent discussions with Prime Minister Narendra Modi also informed him of the damage caused by bottom trawling by Indian fishermen and had also continuously raised his objections with Minister Jaishankar, after a sudden rise in bottom trawling in recent weeks.

Devananda said he had also raised the government’s objections with the Indian High Commissioner in Colombo and the Tamil Nadu government and had requested them to find a solution from their end.

Devananda said he also held discussions with BJP Leader Dr. Subramanian Swamy during Swamy’s recent visit to Colombo last week over the fishermen row and Swamy had assured he would raise this issue in the Indian Parliament soon.

The Sri Lankan Navy in the meantime have been requested to continue arresting all Indian fishermen who enter Sri Lankan waters and seize their vessels.

READ: Crisis in the shipping industry could last till mid-2022

“We will continue to arrest.they cannot come here and fish in our northern waters.their presence in local waters has increased and when they use bottom trawling, it is destroying our sea beds. I have raised the government’s strongest objections through diplomatic channels,” Devananda said.

Yesterday, several Sri Lankan fishermen staged a protest in the North by setting out in their boats from the coast of Mullaitivu to Point Pedro in Jaffna, demanding the government to act against bottom trawling by Indian fishermen.

The protest was led by Tamil National Alliance (TNA) MPS M.A. Sumanthiran, S. Shritharan and Shanakiyan Rasamanickam, and former MP Shanthi Sriskantharajah who also set out in the boats, staging their opposition against bottom trawling and urging Devananda to initiate appropriate legal action against fishermen using the bottom trawling,

However, Devananda slammed the TNA, stating this was a drama created by them to cause agitation among the local fishermen and Devananda added the TNA had staged the protest to gain political mileage among the northern voters.

“TNA is involved in nothing but a drama. I am daily working on this matter and looking to resolve this matter between the two countries. I am in touch with the Indian government over this matter. Even when I was in the opposition, I have been in touch with the fishermen of both sides and had also initiated talks in Katchatheevu. Holding me responsible for failing to find a solution is nothing but baseless,” Devananda said.

Further, Devananda said he will soon set up a committee with the fishermen and marine associations of Sri Lanka and India to engage in discussions to find a solution to the matter.

In the meantime the Navy will continue to strictly monitor the borders as an immediate solution, the Minister said.