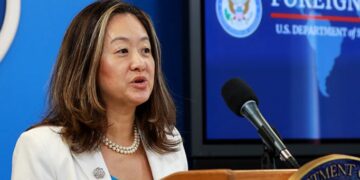 Colombo, October 26 (SAM): Julie Chung, who is slated to take over as US Ambassador to Sri Lanka, will implement President Joe Biden’s key foreign policy thrusts, namely, a tough stand on China’s bid to spread its tentacles in Sri Lanka and a determined push to get the Sri Lankan government to respect human rights and address long-pending war-time accountability issues.

Chung’s testimony to the Senate Committee on Foreign Policy amply indicate her line of thinking on China and human rights.

US involvement in Sri Lanka in the economic and military spheres is slowly increasing, though it has been a major market for Sri Lankan garments for long. But when combined with ally India’s manifest attempt to increase its military and economic engagement with the island nation, the US might be in a position to persuade Sri Lanka to collaborate or cooperate with QUAD, the anti-Chinese strategic alliance between the US, Japan, Australia and India covering the Indo-Pacific region.

While the QUAD, as such, may not be expanded to include Sri Lanka (QUAD would cease to be Quadrilateral if that were to happen) other mechanisms could be explored to establish strategic cooperation. The recent formation of AUKUS linking Australia, UK and the US, is an example. US, India, Sri Lanka and the Maldives could form a new strategic alliance aimed at containing China without mentioning China. The US, Pakistan, Afghanistan, and Uzbekistan formed an alliance (dubbed Continental QUAD, in contrast to the earlier Maritime QUAD) in July this year.  This alliance is not explicitly against China but it is manifestly meant to provide a better and more transparent alternative to China’s Belt and Road Initiative (BRI).

In her testimony to the Senate Foreign Relation Committee, Julie Chung said that her 25-year career in the US Foreign Service an postings in China, Japan, and throughout Southeast Asia, had provided her unique insights into the “importance of American leadership to ensuring a free, open, resilient, and inclusive Indo-Pacific region.”

Chung said that she would be committed to speaking “clearly and consistently in support of democratic values, human rights, and a strong civil society that are essential to democracies and central to our foreign policy approach. We must also be strong partners in encouraging justice, accountability, and reconciliation so that all Sri Lankans can share in the benefits of peace, security, and prosperity.”

On the strategic issue, Chung said: “Sri Lanka is positioned in a strategic location at the heart of the Indian Ocean, and its critical ports, with access to global maritime lanes and trading routes, play a pivotal role in a free and open Indo-Pacific architecture. This reinforces the necessity for the United States to build constructive relationships with Sri Lanka, including with civil society, the private sector, and the Sri Lankan people. If confirmed, I will work tirelessly to advocate for quality infrastructure and investment based on transparency, respect for international law, and good governance, which is mindful of sustainable environmental and labor standards.”

READ: Sri Vikrama Rajasinha wore royalty on his sleeve even after losing his Kingdom

“We must also support US companies doing business in Sri Lanka and utilize the tools we have with the Development Finance Corporation and the Export-Import Bank to provide alternatives to coercive lending and opaque contracts.”

The last sentence clearly indicated a desire to curb China’s economic role in Sri Lanka. She then added: “I will make every effort to advance our values and shared interests so that Sri Lanka meets its full potential to be a vital partner in the Indo-Pacific.”

Chung’s testimony to the Senate Foreign Relations Committee in December 2020 when she was Principal Deputy Assistant Secretary of State for the Western Hemisphere, gives a clearer indication of her policy thrust in the context of China’s growing influence.

“There are extensive linkages between the Indo-Pacific and the Western Hemisphere, through trade, diaspora communities, and multilateral groupings like the Asia Pacific Economic Cooperation (APEC). We have been leading an interagency effort to implement in the Western Hemisphere the principles of the Administration’s National Security Strategy and Vision for a Free and Open Indo-Pacific. At the highest level, we have two strategic objectives: reinforce the position of the United States as the region’s partner of choice and counter China’s malign activities because they threaten hemispheric prosperity, security, and democracy,” she said.

Highlighting the challenges, Chung pointed out that there had been a “dramatic increase” in China’s interest in the Western Hemisphere “as it has sought access to natural resources, raw materials, and commodities, and markets for its exports to fuel domestic growth.”

“The United States is far and away from the largest cumulative source of foreign direct investment in the region. However, Chinese state companies are investing heavily in the region and aggressively pursuing Latin American and Caribbean participation in its One Belt One Road initiative (OBOR), which is focused on infrastructure development around the world. Nineteen Latin American and Caribbean countries currently participate in the OBOR. We have also seen an increase in Chinese concessional loans for infrastructure investment, funding dozens of largescale projects including roads, ports, and dams. All of this is concerning because of the Chinese government’s predatory approach to lending and development, the way the Chinese government does business, and its motivations. The Inter-American Development Bank estimates the infrastructure investment gap in the region is about 2.5% of GDP or US$ 150 billion per year.”

“A region hungry for infrastructure investment finds Chinese concessional loans attractive, but the sticker price on these deals does not reflect their full and hidden cost. China’s way of doing business threatens to undermine the region’s hard-won gains in transparency, the rule of law, labor rights, and the environment. Chinese companies are frequently backed by the Chinese Communist Party and are therefore rife with corruption and human rights abuses. Their investments in the region frequently come with excessive debt and opaque terms, low-quality infrastructure, and environmental damage, and they crowd out local development with an influx of Chinese materials, equipment, and workers.”

Chung suggested that an important part of the US  approach would be to share with its Latin American and Caribbean partners information on how the PRC’s behaviour is out of line with internationally recognized best practices for governance and sustainability and not in their best interests.

Chung informed the Senate pane that in December 2019, the US  launched an expanded initiative called “Growth in the Americas” to catalyze the private sector as the primary engine of growth to develop infrastructure in Latin America and the Caribbean. The focus was on improving the investment climate for all types of infrastructure, including energy, airports, seaports, roads, water, social, telecom, and digital networks. The effort incorporated the expertise and resources of nine agencies across the US government.

Chung said that the US International Development Finance Corporation (DFC) is a critical tool in these efforts. “We expect DFC to deploy at least $12 billion in financing in the region. We need to align State and USAID efforts and resources to fully leverage DFC’s new capabilities. We are also working to expand the Digital Cybersecurity and Connectivity Partnership (DCCP) to the region, modelled on the work the initiative has already accomplished in Asia. Under the DCCP, US government agencies promote open, reliable, and secure communications networks in Latin America and the Caribbean, one critical area where prosperity and security intersect.”

“The United States works with Latin American and Caribbean countries on ICT issues, and our well-established concerns with Chinese companies focus primarily on their security implications,” Chung said.