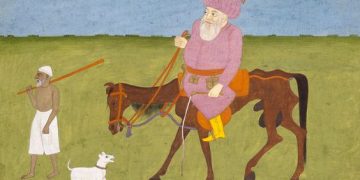 The South Asian court jester was more than an entertainer

The South Asian court jester was more than an entertainer Court jesters in South Asian history were not “jokers” nor were  they mere entertainers who lightened the stiff and ritualistic  atmosphere in the courts of Asiatic potentates. Their sharp wit and pithy remarks were invariably backed by wisdom which was often used by the monarchs to good effect, sometimes even to get out of sticky situations.

There are many stories about court jesters across South Asia spanning the last thousand years. In most of these folktales,  court jesters are not only shown to be maintaining a light atmosphere in the courts, but to be guiding the kings in grave matters of state.

Their timely help had often rescued the king from imminent danger.

The popular folktale of Andare, a court jester of Sri Lanka comes to mind instantly. A popular figure, Andare  is said to have lived in the 18th century. He was born near Devundara, in Matara district of southern Sri Lanka.

Later, he was believed to have been a jester in the courts of the kings of Kandy, namely, Kirthi Sri Rajasinghe and Rajadhi Rajasinghe. According to folklore, Andare died of thirst on a trip to his home town. It is said that the king, hearing of the death of his favorite jester, rushed to the place of his death. On seeing the corpse with all its limbs spread wide, the king smiled and said: “Dear Andare, you are making me laugh even after your death”.

In 2001, a tomb and a monument were built where Andare is believed to have died along with a sculpture showing his body  with his arms spread.

However, it is difficult to ascertain the real timeframe of Andare’s existence or get factual corroboration of all the stories attributed to him.  It is believed that he was the second son of Palawinnage Palliyaguru, an accomplished linguist and a  teacher at the Church of Devinuwara appointed by the Dutch.

Andare is believed to have been an excellent lyricist. He used to display his quick wit through songs. And folklore has it that  these lyrics had been used to get out of tight situations.

The Indian court jester, Pundit Gonu Jha of  Bharora village, is thought to be one of the earliest court jesters in North India. It is believed that he had been blessed by Goddess Kali herself to such an extent that the Goddess herself was defeated in a wit and humor contest with Pundit Gonu Jha. He is often referred to as a Pratyutpannamati (ready-witted).

Jha was a contemporary of Hari Singh – the king of Mithila in the 13th century CE. There are several folktales about him in the Mythili language, depicting him as a witty as well as a wise man.

During the time-period of Gonu Jha there were popular  stories woven around Ash’ab, Bahlul, a  jester in Afghanistan in the court of Harun al-Rashid.Hamid Waheed Alikuzai relates an interesting story about Bahlul:

Coming from the Mughal courts of the medieval period in India are the legends of minister Birbal. He was  in the court of the famous Mughal emperor Akbar. He was one of the ‘Nine Gems’ or ‘Navratna’ in Akbar’s court, Birbal’s original name was Mahesh Das (1528–1586). He later became famous as Raja Birbal.

He was appointed as a poet and singer in around 1556–1562 in the court of Akbar. He is noted for his close association with the emperor given the trust that the latter had in him.

In 1586, Birbal led an army to crush unrest in the north-west of India. But he was killed along with many troops in an ambush by a rebel tribe. Birbal was the only Hindu to adopt Din-i Ilahi– the religion founded by Akbar.

A contemporary of Birbal was court jester Mullah Do Piyaza. But unlike Birbal, he is not mentioned in any of the court chronicles, and has fewer stories attributed to him. He appears only in the 15 th. century manuscripts of Ubyd-i-Zakani. Biography of Mullah Dopiaza alias Abul Hasan Dopiaza, (1892) contains his witticisms. A number of them also appear in modern comics and story books.

Tenal Ramarishna was a South Indian court jester. A Telugu poet from the present-day Andhra Pradesh, he was one of the Ashtadiggajas or the eight poets at the court of king Krishnadevaraya of the Vijayanagara Empire  (1509–1529).

A Shaivaite by birth (worshipper of Shiva), he converted to Vaishnavism (worshipper of Vishnu) and thus changed his name to Ramakrishna. He was also variously referred to as Ramalinga, as well as Vikatakavi (jester poet).

Gopal Bhand (pronounced- Gopal B-h-a-n-r) was from Bengal in Eastern India. He is believed to have been a jester at the court of king Raja Krishnachandra Roy (1710-1883)  of Nadia. But there is no evidence to prove Gopal’s historical basis.

Court jesters across South Asia are often associated with the Bhakti and Sufi cuts in the region. They are also seen as destroyers of established norms and creators of new norms  through wit and jest. Being highly intelligent and bright, they have often helped solve difficult problems of contemporary society and the State.