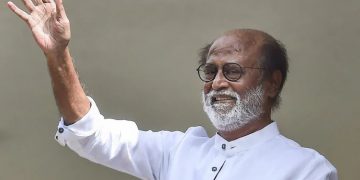 Rajinikanth will launch his political party in January next year. He will make a formal announcement on Dec 31. New Delhi, December 3 (India Today) – Putting an end to speculation, superstar Rajinikanth on Thursday said he will launch his political party in January 2021, and the formal announcement regarding the same will be made on December 31.

Addressing the media he said that his plans were affected because of the coronavirus pandemic and he did not want to be careless.

Saying that the time has come to transform Tamil Nadu, the superstar said, “Will work as much as possible for the people. If we don’t do it now change will never happen.”

He also said his victory in politics will be the victory of the people. He said, “It all depends on the people of Tamil Nadu. If I win when I enter politics, it will be the people’s victory.”

Rajinikanth said, “We will surely win assembly polls and give an honest, transparent, corruption-free, and spiritual politics. A wonder and miracle will definitely happen.”

He had made the announcement about him entering politics on Dec 31 in 2017.

Rajini had met his district secretaries of RMM on Monday and had said he will make an announcement on the same soon while talking to the people.

Rajini had called his line of politics spiritual, which was beyond religion, corruption and one for the welfare of the people. Rajini had asked his supporters to go to every street in the state and pass the message about his intentions and he had told them then, “when the time is right I will give the war cry and at that time all of you be ready to support me.”

In 1996 Rajini had openly supported the DMK and had called for “Saving Tamil Nadu from Jayalalithaa” and in that election when AIADMK was defeated Rajini was seen as a major game-changer and many had been expecting him to make his political entry soon after. But the wait of his political announcement came to an end, a year after Jaya’s death.

After his announcement, though the superstar had clarified that he will not join any existing political parties, Rajini had personally gone and met DMK patriarch Karunanidhi to seek his blessings. Though against the AIADMK, Rajini like many in the cine field was close to many in the DMK. Rajini is said to have a good relationship with Alagiri, Stalin’s elder brother.

The actor’s political entry is expected to play spoilsport for DMK and AIADMK and many suspected that the superstar who is close to many RSS and BJP Leaders Mohan Bhagwat, Amit Shah and PM Modi was pushed by the BJP to make his political entry.