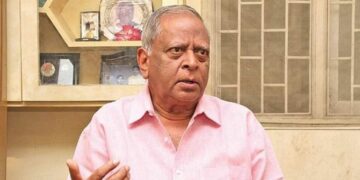 Colombo, May 19: Thirty years ago, on 21 May 1991, Velupilai Prabhakaran made a cardinal mistake that changed the political history of India and Sri Lanka. The assassination of former Prime Minister Rajiv Gandhi on that day marked the end of the Nehru-Gandhi domination of Indian politics and that incident was also the turning point that touched off the downfall of Tamil terrorism in Sri Lanka.

In a strange coincidence, the brilliant Indian police officer who uncovered the hand of Liberation Tigers of Tamil Eelam (LTTE) in the gruesome murder plot became a victim of the COVID19 pandemic last week on May 12.

The Chief Investigating Officer in the Rajiv Gandhi assassination case Superintendent of Police, K. Ragothaman, a brave and fiery officer, deserved police honors at his funeral, but sadly the pandemic health protocol would not allow any such grand farewell.

During the trial, judges praised the meticulous work of Ragothaman, who handled the case brilliantly, securing a conviction for the accused and revealing the whole conspiracy behind the assassination.

On 21May 991, Rajiv Gandhi and 16 others died when a suicide cadre activated a powerful bomb at an election rally at Sriperumbudur, near Chennai. Initially, there was no inkling of conspirators’ identity, modus operandi, or the motive. None had claimed responsibility and there were no arrests of accomplices which in most cases is the beginning point of the investigation into the crime. Lack of clues made CBI’s Special Investigation Team (SIT) head D. R. Karthikeyan to admit that it was a “blind case” as there were no clues or accomplices to interrogate and arrive at the truth.

Subsequently, Ragothaman was appointed Chief Investigating Officer of the SIT team, and one of the first leads he got was a camera recovered at the assassination site. Using Argentine soccer star Maradona’s description of his world cup winning goal, Ragothaman later described it as “the hand of God” in a blind case as the camera had survived the RDX blast and thousands of pellets.

The gruesome assassination was meticulously planned and flawlessly executed by hardcore cadres of LTTE. It was an unique and first of its kind murder plan wherein a human bomb, that too a woman, was used, killing not only Rajiv Gandhi, nine police officers and six other persons, but also causing grievous injury to more than fifty persons assembled at the election meeting to hear the views of Rajiv Gandhi. Due to the assassination of Rajiv Gandhi, there was turmoil in India leading to postponement of the parliamentary elections.

Former Ambassador Golaswamy Parthasarathy, told me at a meeting in Delhi later that, “India will never forgive the LTTE, because the perpetrators of this heinous crime, by assassinating Rajiv, directly interfered in our sovereign rights and caused disruptive activities in the Indian democratic system.”

The method of assassination as well as the terrorist outfits involved therein remained a mystery for quite some time and many interested parties floated false news to divert the investigations.

In spite of having no clue to start with, SP Ragothaman continued unabated with the investigation. Piece by piece, step by step evidence was collected, the culprits were apprehended and the main faces of the conspirators, Prabhakaran and his Intelligence Chief Pottu Amman were unmasked.

Ragothaman later published a book ‘Conspiracy to Kill Rajiv Gandhi: From CBI Files’ giving a detailed account of the investigation. He also exposed persons behind the disinformation campaign and revealed as to how the CBI investigation was derailed and many of the bureaucrats and political personalities were allowed to go scot free.

Ragothaman and his team found out that a photographer named Hari Babu had used the camera, which was found at the murder site. When the color roll was developed, the SIT team got the first set of photos till the time of the assassination.

Ragothaman pieced together information from the rough list of persons in the exclusive area, and those who were permitted to garland or present shawls to Rajiv Gandhi. Inquiries began about these persons, while later forensic experts came up with the belt bomb theory, employed by a female suicide bomber, judging by the severity of impact on her, and pieces of clothing that got stuck to the explosive. The SIT team established one of the persons in the list permitted to garland Rajiv as the suicide bomber as Dhanu. Later her connection with LTTE intelligence man – one-eyed Sivarasan – was also found out. Similarly, the motive for the assassination was also clearly established.

These were major breakthroughs in the case, established by the tireless work of the investigation team headed by Ragothaman. From there on, the hunt for the killers began, ending in arrests and the suicide of Sivarasan. Ragothaman organised and presented an iron-clad case in the court which could not be challenged by the defense.

The SIT preferred to gather evidence and confront the accused with the evidence. Ultimately, the accused revealed their involvement and also outlined the conspiracy. Some of the accused also confirmed the identity of persons like Sivarasan, Dhanu, and Subha.

However, Ragothaman also mentioned areas of disagreement with the heads of CBI, including Karthikeyan over the denial of permission to question some politicians whose names cropped up during the investigation. Karthikeyan and others in the CBI apparently did not want questioning of politicians as it would derail the investigation and give it a political twist which would prevent the SIT from carrying out its work.

The case filed by Ragothaman was backed by documentary and other evidence. All over the world, police agencies recognized and applauded the work of the Indian SIT. Finally, the trial court convicted the accused. Several suspects received the death sentence, which was later commuted to life term. A few convicts including Nalini and Murugan are still jailed in Tamil Nadu.

The conviction of culprits did not end Ragothaman’s troubles. He had to deal with fringe elements and groups which indirectly supported the LTTE and its separatist tendencies. These groups backed by politicians such as Vaiko, Ramdoss and Seeman launched a massive campaign against the CBI with political motives, whipping up sympathy for the assassins while the families of those who died in the blast including policemen, were left out in the cold.

Ragothaman’s statements were misinterpreted by a section of the political spectrum in Tamil Nadu which tried to claim that the convicts in the Rajiv case were innocent and should be freed immediately. Ragothaman refuted their version and said even if the involvement of others should be examined and the wider conspiracy unveiled, it did not make the convicts in the case innocent, and that all of them were guilty of being part of the deep-rooted conspiracy behind the cold-blooded assassination.

Ragothaman, a brave policeman, could not be cowed down be threats. He lived in a small flat and never sought security for himself, though he seemed to be the target of fringe elements. A recipient of the President’s Medal, Ragothaman brought out several books like Conspiracy to Kill Rajiv Gandhi in English and Rajiv Kolai Vazhakku in Tamil, Assassination of Mahatma-Indira-Rajiv Gandhi’, and Third Degree Crime Investigation Management: Crime and the Criminal. He also produced a documentary titled ‘Human Bomb’ based on the Rajiv Gandhi assassination case.

Ragothaman’s book revealed receipt of prior intelligence reports that were neglected by sleuths, a case similar to that of the 2019 Easter Sunday attacks by Muslim terrorists in Sri Lanka. Ragothaman said, during interrogation, the SIT came across evidence that the Indian Intelligence Bureau (IB) had intercepted large volume of the LTTE wireless messages between Tamil Nadu and Jaffna. One of the officers who was intercepting the coded message informed his superior that the LTTE was planning a major operation and the urgency for decoding the message be on priority.