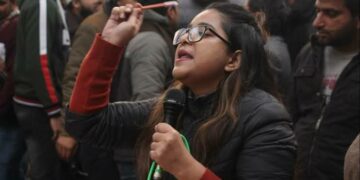 New Delhi. June 23 (SheThePeople TV): Safoora Zargar, 27-year-old MPhil student and CAA-NRC student activist, who had been arrested under the Unlawful Activities (Prevention) Act, has been granted bail. The Delhi High court granted her bail after the Delhi Police stated that it had no objection to release her on “humanitarian” grounds, LiveLaw reported. Zargar is 23 weeks pregnant.

The Delhi Police had opposed the bail plea, saying that around 39 deliveries have taken place in the Tihar Jail in the last 10 years, hence pregnancy doesn’t count.

“There is no exception carved out for pregnant inmate, who is accused of such heinous crime, to be released on bail merely because of pregnancy. To the contrary, the law provides for adequate safeguards and medical attention during their custody in jail,” read the report submitted by Delhi Police in the court.

However, Solicitor General Tushar Mehta cited that the state has no problem if Zargar is given bail on humanitarian grounds.

The bench consisting of Justice Rajiv Shakhdher granted regular bail to Safoora. She has been asked to furnish a personal bond of 10,000 rupees.

The bench consisting of Justice Rajiv Shakhdher has granted regular bail to Safoora. She has been asked to furnish a personal bond of rupees 10,000. Following are the terms of her bail:

She should not indulge in the activities she is being investigated for.

She should refrain from hampering the investigation.

She has to take the permission of the concerned court before leaving the territory of Delhi.

She has to get in touch with the investigating officer once in every 15 days through a phone call.

Advocate Nithya Ramakrishnan, who appeared on the behalf of Safoora has, however, cited that she might have to visit Faridabad to consult her doctor.

Safoora is the media coordinator of the Jamia Coordination Committee (JCC) and played a central role in leading the Citizenship Amendment Act protests from Jamia Millia Islamia University, since December.

She was put into the Tihar Jail on April 10 for leading these protests. Moreover, after her bail was denied a few days later, she was then booked under the Unlawful Activities Act, 2019 (UAPA). Under this act, she has been charged with 18 criminal activities including rioting, possession of arms, attempt to murder, incitement of violence, sedition, murder, and promoting enmity between different groups on grounds of religion.

A few days ago, The Center For Human Rights, American Bar Association noted that Safoora Zargar’s detention (pre-trial) doesn’t appear to meet the standards of International Law. The detention goes against the laws, including treaties to which India is a state-party, Live-Law reported.