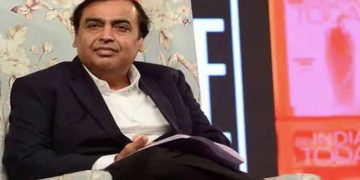 by Editor
in Around South Asia, Around The World, India
Reading Time: 3 mins read
4 0 India, January 26 (India Today) – It would have taken 10,000 years for an unskilled worker to make what Reliance Industries Limited (RIL) chairman Mukesh Ambani made in an hour during the coronavirus pandemic, according to a recent Oxfam report.

The report, titled ‘Inequality Virus’, added that it would take an unskilled worker at least three years to earn what the RIL boss earned in a second during the pandemic. According to the Oxfam report, Ambani earned Rs 90 crore per hour during the coronavirus pandemic.

In comparison, around 24 per cent of people in the country were earning Rs 3,000 per month during the pandemic. It also suggested that the wealth of Ambani alone would be enough to keep 40 crore informal workers out of poverty for at least five months.

“Data shows what Ambani earned during the pandemic would keep the 40 crore informal workers that are at risk of falling into poverty due to Covid-19 above the poverty line for at least 5 months,” the report said.

The report said that India’s top 100 billionaires saw their wealth surge by 35 per cent during the pandemic since March. In monetary terms, their cumulative wealth translates to Rs 12,97,822 crore.

The amount is enough to give 13.8 crore poorest Indians a cheque for Rs 94,045, according to the latest India supplement of the Oxfam report. India ranks sixth in the world in terms of how much billionaires increased their wealth during the pandemic. US, China, Germany, Russia and France are placed higher than India on the list.

“India’s 100 billionaires have seen their fortunes increase by 12,97,822 crores since March last year which is enough to give every one of the 138 million poorest Indians a cheque for 94,045 each,” the report said.

The report also said that the wealth of the top 11 billionaires during the pandemic would have easily sustained the MGNREGS or the Health Ministry for the next 10 years.

“If India’s top 11 billionaires are taxed at just 1 per cent on the increase in their wealth during the pandemic, it will be enough to increase the allocation of Jan Aushadi Scheme by 140 times, which provides affordable medicines to the poor and marginalized,” the report further added.

The above details are just a glimpse of the widening income gap around the world. IndiaToday.in had earlier reported how the pandemic had made the rich even richer, while the poorest population suffered irreparable damage during the crisis.

The report termed the coronavirus pandemic as the world’s worst public health crisis in a hundred years and added that the economic crisis triggered by the pandemic is only comparable with the Great Depression of the 1930s.

Rich vs poor during pandemic

In comparison, the data showed that 1,70,000 people lost jobs every hour in the month of April 2020. Findings of the report make it clear that the rich got richer during the pandemic, while the poor suffered.

“The mass exodus on foot triggered by the sudden lockdown and the inhuman beating, disinfection and quarantine conditions the informal workers were subjected to turned a health emergency into a humanitarian crisis,” it said.

“Over 300 informal workers died due to the lockdown, with reasons ranging from starvation, suicides, exhaustion, road and rail accidents, police brutality and denial of timely medical care. The National Human Rights Commission recorded over 2,582 cases of human rights violation as early as in the month of April 2020,” the report added.