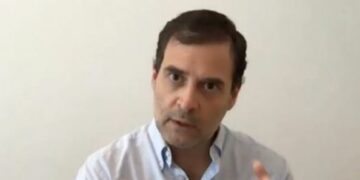 by Editor
in Around South Asia, Around The World, India
Reading Time: 4 mins read
5 0 New Delhi, May 29 (The Print) – Launching a scathing attack on Prime Minister Narendra Modi’s handling of the second wave of the Covid-19 pandemic, Congress leader Rahul Gandhi warned that India will witness a third, fourth and fifth wave of the disease if the government did not change its vaccine strategy.

Rather than events, Gandhi said, India needs a vaccine strategy. “The Prime Minister does not think strategically. He is the event manager. But we don’t need events but a strategy. People are being killed and a strategy is needed,” the Congress leader said while addressing a press conference Friday.

Gandhi said the Prime Minister’s indulgence in ‘nautanki’ (spectacle) was the reason for the second wave that saw India register a record number of daily cases and deaths. “We are the vaccine capital, we make vaccines. No one could understand the first wave. But the second wave is the PM’s responsibility. The nautanki he did and the fact he did not fulfil his responsibility … his stunts, his lies about death … is the reason why we are in this situation today,” he claimed.

“Get your vaccination strategy right, don’t give chance to coronavirus to mutate. If we don’t get it right, there will be third, fourth and many waves in the country,” he added.

On a question about a tweet Gandhi had posted earlier this month, calling the crisis a ‘Movid’ pandemic, the Congress leader said: “If Modi ji’s action would have been different, then we would have had Covid only. But his action gave scope to Covid … My message was that PM of India made space for Covid through his actions, whether it was banging thaalis … the gathering in West Bengal, all gave Covid space to flourish. Modi ji helped Covid, thats why I called it Movid.”

Gandhi also addressed the ‘toolkit’ controversy by calling it a ‘BJP invention’.

Cautioning the government, the Congress leader said the current pace of vaccinating the population wasn’t fast enough, and warned of more waves of the infection as the virus mutates. “Our mortality is a lie and the government is spreading this lie. The government should understand that the opposition is not their enemy … the opposition is in fact showing them the way. We would not have gone through this crisis if they had heard us in February.”

The former Congress president added that he had “directly” told the PM that India will witness multiple waves as the virus will mutate and adapt.

“You have left the door open and have still not shut it. You have vaccinated only three per cent of the population, leaving the rest vulnerable. The US has vaccinated half its population. Brazil has vaccinated 8 to 9 per cent. They are not the vaccine capital, we are. We make vaccines,” Gandhi said.

“It is important to understand we are fighting a war with corona. Once you do that you need to realise what this virus is. Corona is not a single disease but an evolving one, it changes and transforms. The only way to stop corona is to remove the space within which it moves. Do not give it time to move. There are some temporary and some permanent ways to fight. Temporary moves which may be brutal but possibly required under certain circumstances are lockdown, social distancing, sanitisation, masks. These are temporary measures that slow the virus but don’t stop it. Vaccine is a permanent solution and without this we will continue to witness multiple waves,” he said.

Gandhi also accused the government of lying about the number of Covid-19 deaths. “Our death rate is a lie. The government is spreading that. The government should tell us the truth. Lying about death is helping coronavirus. It’s gone past politics. It is about saving people’s lives. The future of Indians is at stake.”

On whether Congress-governed states were also under-reporting deaths, Gandhi said he had “personally spoken to our CMs” and told them to report the facts.

“I have told them that there would be problems in speaking the truth, but we need to speak the truth. Whether Chhattisgarh CM or others …  It may hurt but will also give us feedback. If we have to fight with Covid, we need truth. I am saying with a guarantee that the death rate of the Modi government is completely a lie, an exponential lie,” he said.

Gandhi also criticised the central government and the PM for not putting in place a system to submit feedback, which, he said, was essential to fight the disease. “The foreign minister is busy giving lectures that India has made its mark … we have carried out vaccine diplomacy. You exported vaccines … And only 3 per cent of Indians have got the vaccine.”