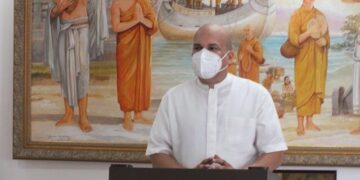 Assuming his duties at the Sri Lankan High Commission in New Delhi on Monday, Moragoda stressed the importance of working as one team to advance the interest of Sri Lanka. He officially released his policy framework entitled “Integrated Country Strategy for the Sri Lanka Diplomatic Missions in India 2021/2023”, which is expected to provide guidelines for the functioning of Sri Lankan Diplomatic Missions in India for the next two years.

The policy framework is based on ‘Satara Sampadha’ or the four accomplishments, referred to in the Vyagghapajja Sutta of the Pali Canon, which comprises Saddhā, Sīla, Cāga, and Paññā, which in the modern context of international relations, could be interpreted as Trust, Virtuous behaviour, Sacrifice and Thorough understanding, respectively.

The document can be accessed via https://www.slhcindia.org/images/stories/N_images/PDF/ics%20english%20final300821.pdf