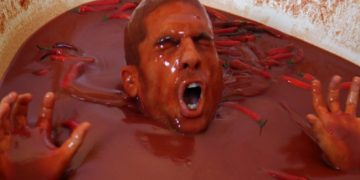 Aug 25 – Worst decision ever? If they were handing out prizes, this one might win.

A YouTube star thought it wise to make a video of himself bathing in a tub full of hot sauce. Cemre Candar, who loves to ‘share his imagination’ (that’s what his bio says), has earlier had success with his videos showing him swimming in a tub of melted chocolate and Oreos. So he decided that his next attempt should be with hot sauce. Points for bravery, but not much else.

The video, which has received over 2.4 million views since August 2, shows the YouTuber filling his tub with 1,250 bottles of hot sauce. Don’t worry though, “all hot sauces were about to expire so no money and hot sauce were wasted in this video.” Because that’s the major concern here. He also adds whole red chilies into the mix.

Eventually, Mr Candar takes a nice dip in his hot sauce bath and if we say he regretted it instantly, it would be a grave understatement. But just a dip isn’t enough apparently, so he takes his attempt a notch higher.

We’re not giving more away, you’ll just have to watch the video to see what happens. If anything, it’ll make you understand there’s a huge difference between chocolate and hot sauce.